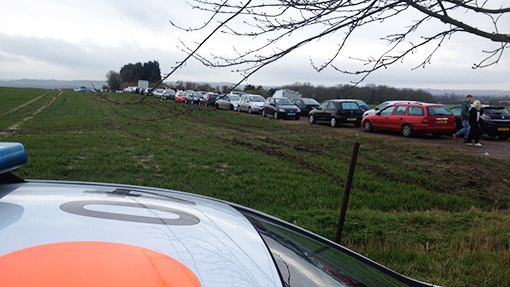 A farmer whose buildings were taken over by a 1,500-strong rave party has spoken out over the stress and financial losses he suffered.

Bedfordshire arable grower William Parrish was woken by a phone call at 1am on Sunday 2 March telling him that hundreds of vehicles were descending on his farm buildings.

The police told him up to 1,500 people were in his grain store at Manor Farm, near Shefford.

“There were only two police officers initially and they were powerless to move the people on,” Mr Parrish told Farmers Weekly.

“It was incredibly frustrating. I never thought that something like this could happen to me.”

The police did manage to seize the ravegoers’ sound equipment and their generator temporarily halting the party.

“But the ravers were so well organised that they had brought back-up gear and used my generator to power it.

“They knew exactly where everything was on the farm and smashed their way into the building housing my generator,” Mr Parrish said.

“The whole thing must have been months in the planning. There were 200 cars parked in the lanes and on my fields. More vehicles turned up to drop people off. I was stunned by it all,” he said.

The shed, which will take up to 3,000t of grain, was “rammed full with people”, according to Mr Parrish. People had not just come from all over East Anglia but as far away as Scotland to take part, he added.

By midday on Sunday 18 police officers, sniffer dogs and a police helicopter were attempting to break up the rave.

“I had a drug-crazed man banging on my door and that’s when you realise how vulnerable you are. The police arrested him and found he had cocaine on him.

“The stress of the whole thing was horrendous. I have a young son and you just are afraid; at the same time you fear that you are going to lose it with these people and get angry.”

The rave finally finished after about 15 hours at 3pm on the Sunday.

“The police found more class A drugs and other types of drugs; the whole place stank of marijuana,” Mr Parrish said.

In addition to the drugs there were 34 stolen nitrous oxide bottles and hundreds of small CO2 canisters found.

“Apparently people at these raves fill balloons with the nitrous oxide and suck in the gas to get high,” he said.

The rave left the farm littered with balloons, cigarette butts and drink cans. Fuel was stolen to power the sound equipment and the 400t of grain still in the barn will have to be cleaned professionally to make sure it is safe. Arable fields around the barn are badly rutted and churned by the ravegoers’ vehicles.

Mr Parrish has begun the clean-up and is planning to improve security.

“I will be buying stronger gates, locks and concrete barriers to access tracks. The only way to stop this is to prevent it starting. Once it has begun there is no way anyone can shift that many people.

“I would advise people to improve their security now. Don’t let it happen to you.”