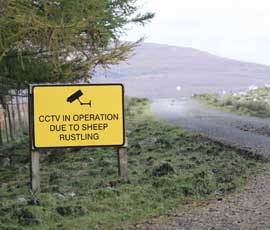 A farmer in Scotland has installed security cameras in a bid to stop rustlers who have stolen hundreds of sheep in several raids.

David Renwick, who farms a remote unit at Keppoch on the 6,000-acre Eilean Darach Estate at Dundonnell in Wester Ross, said he had lost “70, 80 or even 90” sheep a year over the past few years. The thefts have cost him tens of thousands of pounds.

Mr Renwick has installed CCTV all the way down a single track road used by the thieves in previous raids.

“It may seem like an extreme measure but we are losing a lot of money because of rustling,” he said.

This is the first time such action has been taken to deter rustling in Scotland but thefts have doubled here in the past two years and NFU Mutual is warning of worse to come.

NFU Mutual Spokesman Tim Price said: “Rustling in Scotland has doubled since 2009 and runs into thousands of sheep a year.

“It is threatening the livelihood of farmers – the loss of sizeable numbers of sheep can tip the balance of a farm – but measures such as CCTV will have an effect.”

• Have your say on farm crime on our forums