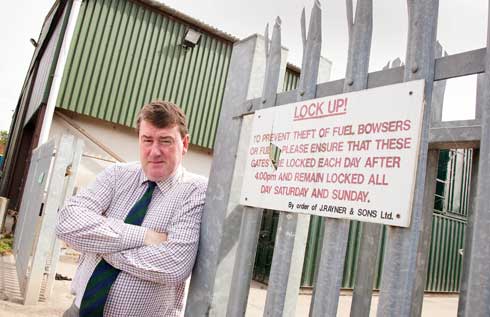 A farmer has built a 7ft high, metal barricade around his farm to deter joyriders – and he hopes to finish the job using crowd control fencing from the London Olympics.

Mr Rayner, who claims his business suffers “a crime a day”, admitted that the fencing would be unpopular with locals who use public footpaths surrounding his fields.

But after becoming disillusioned with the service provided by Thames Valley Police, he feels the fencing is the only way to keep unwanted vehicles off his land.

“We have got footpaths running through our farm and we have been plagued by motorbikes damaging crops,” said Mr Rayner.

Mr Rayner, a director at J Rayner and Sons, based in Horton, Berkshire, is halfway through putting up two miles of Heras fencing around his fields. The project is costing him thousands of pounds.

He hopes to finish the job by securing a good deal for fencing used for crowd control during the Olympics. “This winter, we are hoping to buy some of the Olympic fencing and out a permanent fence up.”

The problems with motorbikes appeared to be worse in Berkshire compared with Surrey and Greater London, he said.

“Thames Valley Police has a no-chase policy with motorbikes and if they catch a motorbike on your land, they just give them a warning and tell them not to do it again,” he added.

“However, we do know that when we phone the Met Police, we normally have the third cavalry arrive.”

Mr Rayner believes most youngsters know they should not be entering his fields, but many do not realise when they are causing damage.

“A field to them is a field of grass – they don’t care,” he said. “They are just doing it because they think they have the right.”

He claims that some of the cars and motorbikes are stolen and would like to see laws passed so that all owners have to register vehicles through their own identity at the Post Office, such as in most other European countries.

The fencing project is the latest in a series of crime prevention measures Mr Rayner has taken out to protect his farm business from crime.

Ram-proof steel gates secure entrances to fields, which are all either moated or surrounded by walls.

In recent years, thieves have stolen at least five tractors belonging to Mr Rayner in East Berkshire alone. Trackers, costing £500 to install plus a monthly charge, have been fitted to his fleet of John Deere and Kayote tractors.

“Crime has got so bad that we can no longer leave a tractor or any machinery unmanned. If the combine breaks down, the man has to stay with it,” said Mr Rayner.

Bales can never be left out in fields for longer than an hour – or they risk being stolen or set on fire, he added.

Metal theft has affected Mr Rayner less than some of his farming neighbours, but cultivators and gates have been stolen.

“We’ve been welding gates down for a very long time, but there is lots the government could do, you cannot just blame the police,” he said.

Mr Rayner would like to see compulsory identification checks introduced for anyone taking scrap metal to a merchant with payments made only through BACS or an approved bank account.

Three years ago, Mr Rayner had CCTV installed at Berkyn Manor Farm, his farming base in Horton. A local installed the security system for £4,000 with no annual contract.

The system includes six cameras, a 24-hour recording machine and a TV monitor with internet access, which allows Mr Rayner to log in and view from anywhere in the world.

“When I am on holiday I can see what the weather is like for drilling or combining,” he said.

But Mr Rayner said the best addition to his farm security was the electronic gate he built at the front entrance of his farm in 2004.

Before the gate was built, strangers had been entering his yard, looking around and helping themselves to his equipment and farming goods, said Mr Rayner.

“The electronic gate has brought me more pleasure than any tractor or any cultivator or any combine that I have ever bought,” he added. “Because I know that my gate is always locked and only people that should be there are there.”

Supt Dave Gilbert, commander of the Windsor and Maidenhead Local Police Area, said: “It is disappointing to hear that Mr Rayner is unhappy with the service he is receiving from Thames Valley Police and I am hoping to meet with him in the next week to address some of the issues he has raised face to face.

“Rural crime is a force priority for Thames Valley Police and we are proactively targeting those who bring misery to people living in these areas. We have recently made a number of arrests and will continue to run operations to tackle rural crime.”