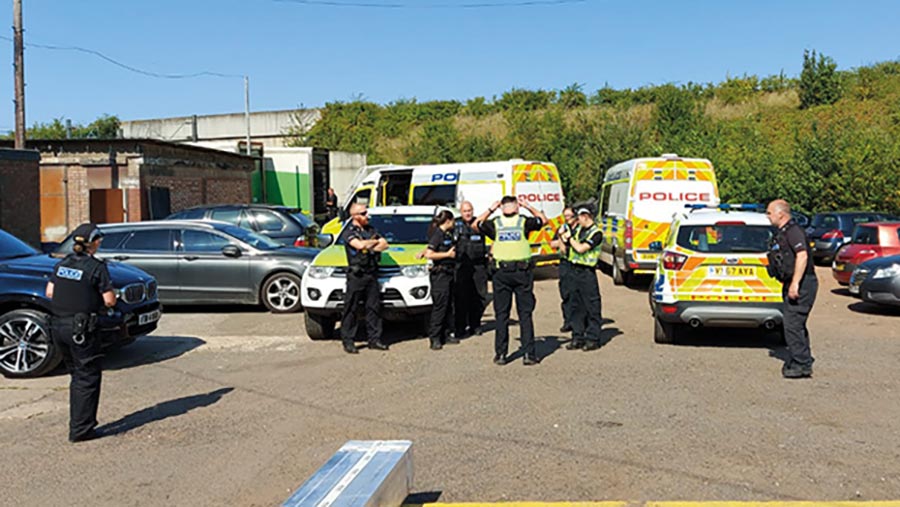 A farmer turned detective and traced a rural thief believed to be responsible for the large-scale theft of high-value tractor global positioning system (GPS) equipment.

The entire fleet of John Deere GreenStar cab displays and StarFire satellite receivers were taken in an overnight raid on 15 July at Prestons Agricultural Contractors in Desford, Leicestershire.

The theft took place between midnight and 2am and a suspect, a man aged in his 30s, was captured on CCTV stealing the items.

The farmer alerted Leicestershire Police and officers arrived at the scene at aboutv 9am the same morning. They could not find any lines of enquiry and issued a standard crime reference number.

But devastated company owner Adam Preston and his team decided they would try to track down the suspect.

After Mr Preston had suffered the theft of GPS kit from his tractors on a previous occasion, he had installed tracking device on some of the domes. The small devices were purchased from Amazon for about £200 and included an app which allows users to trace their whereabouts.

Following the theft, the tracker devices were signalling on the app that the stolen domes were situated about 40 miles away, in the West Midlands.

Mr Preston and three others jumped in a car and travelled to a built-up area in Birmingham. The trackers were able to pinpoint a rough location where the domes were located.

While the four men were parked up at the roadside, they suddenly spotted a man carrying a bag, with what seemed to contain the familiar yellow domes.

The farmers got out of the car and pursued the man on foot. They saw him walk over to another vehicle and open the boot, which revealed an “Aladdin’s cave” of stolen tractor domes and screens.

As the farmers ran towards the suspect, he panicked and fled, jumping across gardens and vaulting fences.

However, thanks to their efforts, police were able to input the details of the abandoned small van on the national Automatic Number Plate Recognition (ANPR) database.

They found the vehicle’s registration was recorded in the locality of tractor GPS kit thefts in areas covered by seven police forces in England. This includes thefts in Cheshire, Lincolnshire, Staffordshire, Leicestershire and Wiltshire.

The suspect has since fled to eastern Europe and police forces are trying to trace him and bring him to justice.

Mr Preston said: “If the courts had got their backside into gear and issued the police a warrant for his arrest earlier, they may have been able to apprehend him before he managed to get out of the country. If he comes back here, they will pick him up.”

Meanwhile, Mr Preston has recovered all the items stolen from his farm, worth about £100,000 in total. Additional GPS kit, worth about £30,000 in the same haul, has been returned to a farmer in Skegness after it was stolen in an earlier raid.

In total, police estimate that the suspect could be responsible for the theft of around £400,000 of kit from tractors.

They are not sure if he was working alone, but believe he may have had spotters making farm deliveries and tipping him off about the locations of John Deere kit.

PC Rob Cross, a rural police officer based at Market Bosworth, investigating, told Farmers Weekly: “From an evidence point of view, the suspect was the only person at the farm. He was later found carrying the stolen items and the car was registered to him.

“From a practical point of view, we think he’s working with someone else. It is quite noticeable he has knowledge about where John Deere kit is.”

“Remember, when baling or harvesting your crop of wheat, these people are out there watching vulnerable farms.”

Anyone with information on tractor GPS thefts should call 101.

The best way to prevent the theft of these components is to remove and store the displays and receivers in a secure place when they are not being used, advises John Deere.

Currently, StarFire receivers cannot be blocked remotely after being stolen, although any stolen units can be flagged in the company’s online StellarSupport system and prevented from being reactivated or upgraded once the existing licence runs out.

The PIN code system is not a theft prevention measure, but rather a deterrent to thieves, who without the code would possess a non-functional piece of equipment.

A spokesperson for John Deere UK said: “There are a couple of existing options for bolt-on locking brackets on the StarFire 6000 receiver and the 3000 unit, although determined thieves would still be able to prise the receivers loose if they were suitably equipped.

“The newer integrated StarFire receivers fitted to 2020 model year 7R- and 8R-series tractors [and the soon to be released X9 combine harvester] are more theft-proof as they are not transferable.”