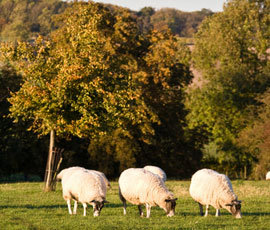 Farmers are being urged to be vigilant after a series of horrific dog attacks killed 17 sheep on farms in Kent.

Sheep farmers at three farms in the Hawkhurst area have reported dead or badly injured sheep.

It is believed pitbull terriers or lurchers crossed with pitbulls are responsible for the savage attacks, which have left 17 sheep dead and seven others seriously injured.

Some of the dead sheep were mauled to the bone and other suffered puncture wounds to the throat, according to local reports.

A spokesman for the RSPCA said police were focusing their enquiries on dogs belonging to travelling families in the area. However, police have refused to confirm the reports.

A spokesman for Kent Police said: “We are investigating a number of incidents of sheep being reportedly attacked by dogs in the Hawkhurst area, south of Cranbrook.

“We are making enquiries locally and trying to establish the owners of the dogs. Seventeen sheep have been killed and seven wounded.”

Anyone with information is urged to contact police on 101, quoting the reference number 04*357.

Check and report crime in your area using our Crime Register