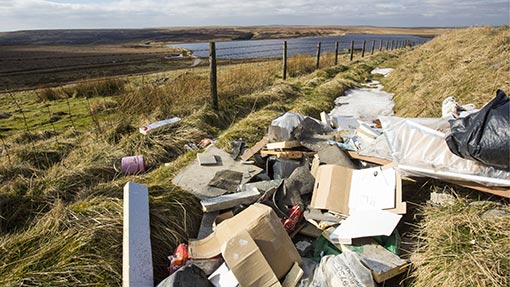 Fly-tippers could face jail in the future after judges were ordered to impose much heavier punishments.

The tougher stance, which will be in place in England and Wales from 1 July, was ordered by the Sentencing Guidelines Council. It told judges that penalties for fly-tipping needed to better reflect the seriousness of the crime. And the council created a framework for the types of punishments to be handed down.

Agricultural solicitor David Kirwan from Kirwans Solicitors said: “To this point, penalties for fly-tipping have been inconsistent. The new guidelines are a real triumph for farmers and should ensure that courts hand out appropriate sentences and treat all cases across England and Wales consistently.

“The prosecution of environmental offences is far less common and therefore magistrates are often unfamiliar with sentencing defendants for these offences. This can result in punishments that are far too low for the risk to public health caused, not to mention the distress and inconvenience caused to the farmers faced with the waste.”

But Mr Kirwan said the new guidelines for environmental offences were comprehensive and introduced a starting point for each sentence which must be used by judges.

“This will result in heavier punishments for most defendants, most notably those who have committed offences deliberately or recklessly, causing major or significant harm,” Mr Kirwan said.

“Those who illegally dispose of hazardous chemicals, sharp objects or materials such as asbestos, which could cause harm to health, should now expect to receive a custodial sentence, whereas in the past, arguably the lowest kind of punishment may have been imposed,” he said.