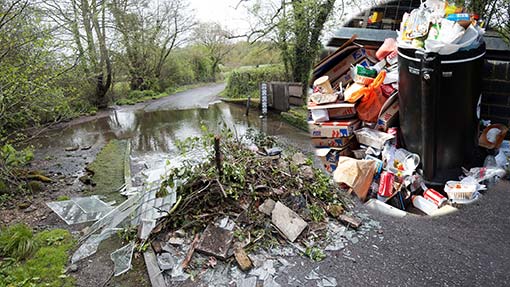 More than two-thirds of farmers are affected by fly-tipping on their farms, according to new research from the NFU.

During the last economic year in England, there were 711,000 cases of fly-tipping – equivalent to one every 44 seconds.

Items that are routinely dumped on farmland include old fridges, chairs, mattresses, tyres and contaminated waste.

A previous study found clearing up the mess costs farmers around £47m each year.

To raise awareness about the blight on the countryside, the NFU is focusing on its Love your Countryside campaign this Easter.

The campaign aims to remind the general public that they have a duty of care to ensure their rubbish is disposed of correctly, while encouraging them to report any unscrupulous rogue traders.

NFU deputy president Minette Batters said: “Fly-tipping on private land remains a significant problem for farmers and landowners who are left frustrated when they, the victims of a crime, are left to clear up dumped waste and then made to pay to dispose of it.

“This waste is not only unsightly, it is a danger to human health, livestock and wildlife and in some cases can pollute watercourses and contaminate land.

“We want homeowners to be more responsible for their actions. They should ensure that any rubbish is taken away by a registered carrier and get a receipt. If not, they run the real risk of being prosecuted if any dumped waste is traced back to them.”

The NFU is also working with local authorities, the Environment Agency, police forces and farmers to develop solutions to tackle fly-tipping.