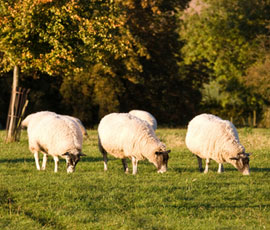 Police have used sophisticated forensics for the first time in a sheep rustling case to catch and convict two men who stole 55 ewes from a Lancashire farm.

Forensic officers used DNA testing to prove the parentage of the stolen sheep and to link them back to the farm where they were taken.

The technique allowed police to successfully prosecute the two men, both from Lancashire, who became the first in 25 years to be convicted of the crime of sheep rustling.

James Hesketh, 20, of Wheatsheaf Avenue, Longridge, was found guilty of handling stolen goods after the four-day trial, which ended on 28 June.

They were found on a farm in Durham five days later after a local farmer became suspicious and contacted the police.

Police officers then enlisted a specialist forensic unit, which used DNA to link them back to sheep on the victim’s farm.

DC Elaine Smalley, from Ribble Valley CID, said: “This is the first time a scientist has carried out DNA testing to prove parentage for a criminal case. I hope this conviction acts as a warning to people who think it is acceptable to commit crime in Lancashire, that they will be targeted and put before the courts.”

“This has been a long and complex investigation that has resulted in the conviction of two men who were part of the local farming community.

“This type of crime leaves the law-abiding, close-knit farming community feeling betrayed by people who purport to be farmers,” said DC Smalley.

“Not only is there a financial burden for farmers but sheep are their livelihood and a great deal of time and effort goes into farming all year round. To have that snatched away by greed is devastating,” she added.

The two men will be sentenced at a later date that is yet to be arranged.

Visit Crime Register to report crime and set up email alerts to warn you of criminal activity in your area.