Being woken at the crack of dawn by the telephone ringing is one of life’s frustrations.

That’s what happened to my mum on Saturday (20 June). On the other end of the line were the police, saying they were outside our farm in Harvel, Kent.

They asked if they could come in and have a “quick chat”. Mum was mortified, worrying about where my brother and I were – or, worse, what we had done.

It turned out that our Claas teleporter was still stuck in the cashpoint at a Tesco store, about two-and-a-half miles away in Meopham.

Someone hadn’t just come through the yard. They had come through adjacent fields, taking down two fences to steal our teleporter.

They had done a nice job of taking the first fence down. The wire was coiled up and the posts were still in the ground.

For the second one, they had used the machine to move equipment out of the way, and had just driven over it.

To add insult to injury, we had actually left the gate to the field wide open. They must have looked at online maps to figure out a route that stayed as far away from houses as possible.

It’s easy in rural areas to let security lapse. The teleporter, a vital piece of kit, was left with the keys in it, no tracker, and no immobiliser. It was easy pickings for a no-good chancer

We had not left the keys in the ignition, but had hidden them away in a cubbyhole under a load of paperwork in the cab.

Somehow they managed to find them, start it and drive off without waking any of us up.

We were not sure if our insurance would cover this theft, as the keys had been left in the cab.

Off I went to pick it up from Tesco. There, I found our teleporter with a smashed window, paperwork all over the cab and the forks in a smashed-up cashpoint.

I drove it home with the hydrostatic drive screaming, as they do, and managing only about 4mph up hills.

The whole time I was thinking about the fool that would have been doing this at 3am, slowly realising that if you’re going to steal a cashpoint, this isn’t the machine for the job. Not that I’ve thought much about it. 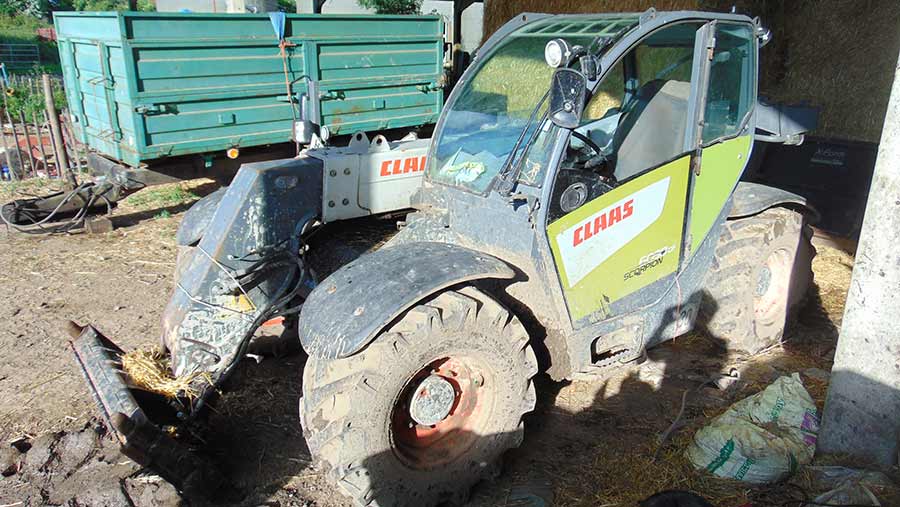 Later in the day, a detective turned up to have a further chat. He said that he had a pretty good idea who the culprit was; it was just a question of proving it.

He explained that they had probably been in a few times during previous weeks, to take a look. If confronted, he said, they would have just said they were looking for the “guvnor” and asking for scrap.

The scary thing, though, is how organised they were – and we weren’t.

It’s easy to let security lapse in rural areas. The teleporter, a vital piece of kit on our farm, was left with the keys in it, no tracker and no immobiliser. It was easy pickings for a no-good chancer, let alone someone who had a plan.

Don’t get caught sleeping when it comes to rural crime.