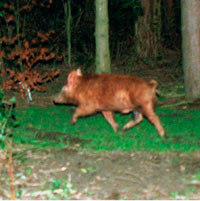 A West Midland farmer has unleashed a herd of pigs in a bid to stop gay men meeting on his land for sex.

Richard Fonge, of Hurst Farm, Kenilworth, let the Tamworth pigs loose after becoming annoyed that men were regularly driving to his farm to have sex in a wood.

He also chopped down 30 trees, erected steel fencing and put up ‘keep out’ signs in an attempt to stop the shenanigans.

Mr Fonge had tried to stop people entering the farmland for a number of years but hadn’t had any success until he released the pigs.

He believes those responsible have now moved to nearby Crackley Wood, which is owned by Warwickshire County Council.

“We’re mightily relieved that it’s off our doorstep,” he told the Coventry Telegraph.

“We got permission from the Forestry Commission and the county council to chop the trees down and it seems to have done the trick. .

“I’m not homophobic, I just don’t like trespassers,” he said. “The police didn’t want to know.

“At its worst there were as many as 10 cars parked in nearby lanes, and they’d start from about 11am.”