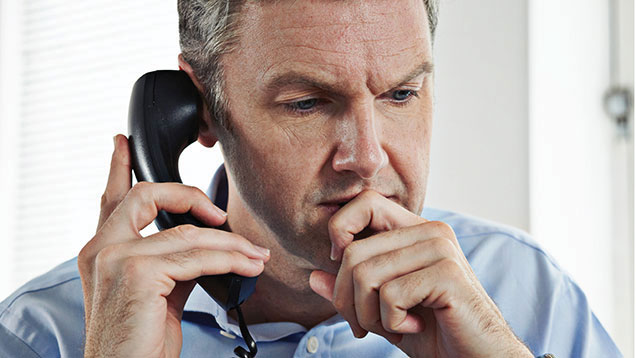 The organisation, which works alongside the police and banks, predicted that phone scams and invoice fraud would rise through the festive period as criminals knew single farm payments would start on 1 December.

A spokesman for the body warned that in the past two years large sums of money had been lost, ranging from tens of thousands to hundreds of thousands of pounds.

County Durham farmer Simon Hall was targeted last week in an attempt to swindle him out of thousands of pounds.

The fraudster telephoned at 9:30 in the evening claiming to be from Lloyds Bank’s payment verification department.

Mr Hall said: “The man was cool and collected and introduced himself as Richard Davies. He sounded professional and unhurried but insisted that I had to move quickly to prevent a suspected fraud attack on my account. He then told me that a bogus second hand tractor firm was trying to take £12,500 from my account and that he was going to try to stop that.”

The man then asked for Mr Hall’s account details and card number.

“He made it sound so convincing. I felt the pressure was on, particularly as it was late in the evening – I felt like time was running out to stop the bogus transaction.”

But Mr Hall insisted on having verification.

“He told me he knew that I had a business account, that I banked online, my phone number and my full name. But encouraged to ring the number on the back of my Lloyds card.

“Luckily I had seen warnings about this type of scam so, even though he was convincing I put the phone down.”

Mr Hall had also seen advice warning against using the same telephone line because the fraudster will have kept it open and be ready to respond.

“Instead of picking that line up again I used my mobile phone to ring Lloyds to check the information. It was, of course, all false,” he added.

The scams used by fraudsters involve telephoning their victim and posing as their bank, the police or another trusted organisation, the spokesman added.

“The criminals will claim that fraud has been detected on the farmer’s business or personal account and that immediate action is required to remedy the situation,” he said.

The victim is then tricked into handing over key financial information or transferring funds into a so-called “safe account” which is controlled by the criminal. Once the money has been stolen, it is often very difficult to recover, because the funds are moved out of the criminal’s bank account immediately.

In the past victims have been targeted across the country with areas such as Yorkshire, Lanarkshire and the Scottish Borders being a particular target.

Invoice fraud can happen when a farmer is tricked into changing bank account payee details for a sizeable payment. Criminals pose as regular supplier and then make a formal request for bank account details to be changed.

Criminals who specialise in invoice fraud are often aware of existing relationships between companies or organisations and suppliers and they know when regular payments are due.

How to stay safe

Everyone who processes invoices and who has the authority to change bank details needs to be vigilant. Always check for irregularities including changes to supplier names and addresses and changes to invoiced amounts.

Look carefully at every invoice. Counterfeit invoices won’t often withstand scrutiny. Compare suspicious invoices with those you know are genuine.

Logos on counterfeit invoices are often blurred and these invoices often contain account details to which the payment should be made.

Be vigilant for amendments to contact numbers and email address on company invoices. Amendments to these may be so minor that they are difficult to spot. For example, a previous email address may have read .org and now reads .com.

Changes to supplier financial arrangements should always be verified with that supplier using their established on-file details.

When a supplier invoice has been paid, it is good practice to inform that supplier of the payment details made, including the account the payment was made to.

Check bank statements carefully. All suspicious debits should be reported to your bank immediately.

Establish a designated point of contact with suppliers to whom your company or organisation makes regular payments. Raise all invoice issues and concerns with this person.

How to beat phone scammers