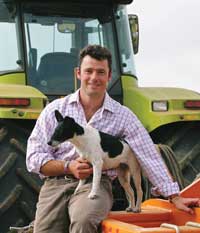 We had a major police incident last month. At least by the nature of the police response – three Panda cars (on separate occasions) and six phone calls from the Police switchboard – one would assume it was a major incident.

Forgive my sarcasm, but we have had a bad fortnight of crime. Four break-ins, seven destroyed padlocks, two diesel tanks plundered, five truck loads of fly tipping and a burnt-out car. Never mind the girl who was nearly mown down by the occupants of the Mitsubushi Shogun thieving the fuel or the hundreds of pheasant poults pillaged in their pens at neighbouring farms.

What was the police response to this? A plethora of crime report numbers and 14 copies of their most patronising missive entitled You’ve been a victim of crime. And the promised follow up visit from the police? Not a peep.

As farmers, and I don’t think Hertfordshire is blighted by crime any more than other parts of the UK, daily life is becoming less like Emmerdale and more like the Wild West.

A decade ago, nearly every farm entrance in the county had a five bar wooden gate pushed back against the hedge welcoming all-comers. Today, cantilever security gates and CCTV impound our properties.

We find ourselves in a perverse scenario where our farming businesses are policed ever more rigorously – licences required for waste; fuel store security, health and safety audits that are all closely scrutinised.

In contrast, we have a bunch of offenders who soil our environment, fly tip all manner of waste on our land, trespass, thieve, spill fuel and endanger the lives of others in their untaxed vehicles. All the while they are untouched by lily-livered laws and enforcers who would rather apprehend an untagged dog than confront them.

To most people in the UK, life as a farmer is an idyllic existence. But those same people also believe that the vermin to whom I refer are misunderstood. Perhaps as farmers we are guilty of silence. Unless we speak up, the problem will never be given the attention it deserves. Letters to our MPs, to local and national newspapers all help in this struggle.

There are active Farm Watch and Countrywatch networks in many counties, but do they get to the root of the problem? When confronted by fly-tippers or hare coursers, is it easier to go quietly than stay on hold to the police for ten minutes, and fill in a crime report which will never be followed up?

Currently, rural crime data is assembled by region. There is no national collation of crime data which accurately reflects the true enormity of the problem. Hence the government sees no urgency for greater resources in the countryside.

Most farmers contribute to the Agricultural and Horticultural Development Board‘s £50m turnover. Under its mission is “developing services that the industry could provide to the community.”

A safer, crime free rural community would get my vote for levy money. The AHDB could develop a national database for farmers to log every incidence of rural crime, (complete with crime number) no matter how trivial. These hard hitting statistics, undoctored by Whitehall spin, would make gritty reading and reflect damningly on government should it chose not to react.

It is high time we reacted positively and within the law before the lawless attitude of others turns our countryside into the OK Corral.