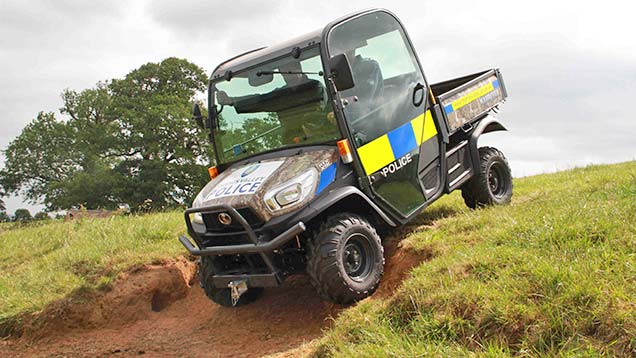 A police force has introduced a marked all-terrain vehicle (ATV) into its fleet in the battle to rid the countryside of rural crime.

Thames Valley Police is the first force in the UK to add a marked ATV to its crime-fighting patrols.

The new police vehicle, a high-performance and rugged Kubota RTVX900, is designed to handle any terrain, even in the toughest of conditions.

It will allow police to get to remote and challenging rural areas that were previously difficult to reach.

Officers will use the ATV to help tackle rural crime in west Oxfordshire.

The move has won the backing of prime minister David Cameron, who is also Conservative MP for the Oxfordshire constituency of Witney.

“I welcome this exciting launch which will see this vehicle used for the very first time by a British police force,” said Mr Cameron.

“In rural areas like my constituency, our forces face unique challenges and this vehicle will be a great asset to Thames Valley Police as they focus their attention on tackling rural crime.”

The ATV was added to the force’s fleet after officers approached Kubota, whose nearby headquarters is in Thame, Oxfordshire, to see if they could work in partnership.

Kubota UK’s marketing manager Karen Tipping said: “We know from speaking to people in the farming industry that rural crime is a serious issue.

“We hope that by providing this vehicle, it will increase confidence so people know the police can get to them when they need them.”

According to the latest figures from rural insurer NFU Mutual, the cost of rural crime in Oxfordshire fell by £320,000 in 2013.

This downward trend was in stark contrast to national figures, which showed rural theft cost economy £44.5m in 2013, up 5.2% on the previous year.