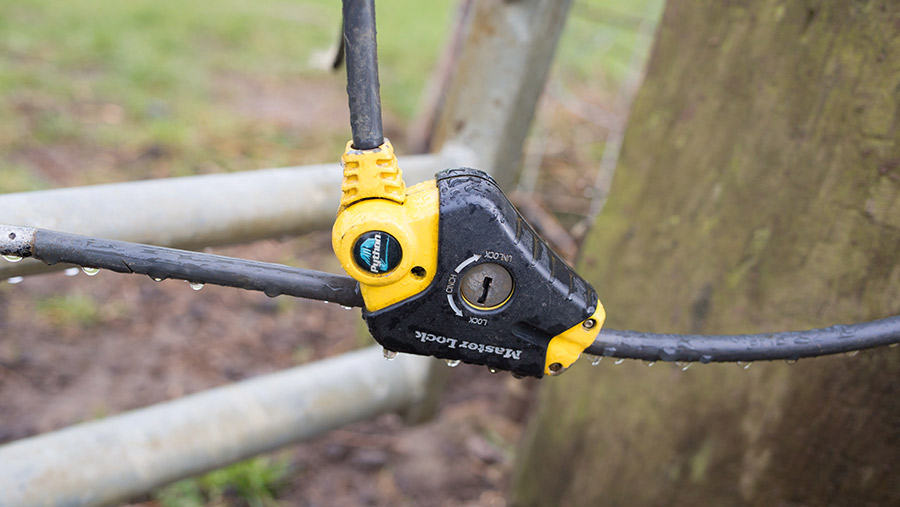 Rustling is now such a threat to livestock farms that some victims are changing their farming practices to avoid further thefts.

PC Sebastian Haggett, of Dorset Police’s Rural Crime Team, reports that some farmers are too scared to keep animals in fields that have previously been targeted by rustlers.

That, he says, is a double financial blow to their businesses as they will still be incurring a cost for farming that land.

In 2020, animals worth an estimated £2.3m were stolen from UK farms; although this was down on the previous years – an outcome which is thought to be in part a result of the coronavirus pandemic lockdowns. The south-west of England, however, saw a sharp rise in livestock rustling.

While the incidence of rustling may have fallen in some areas, the scale of thefts has increased in the past couple of years, says NFU Mutual’s Matt Uren.

“We have seen thefts of up to 50 animals taken in one go. Those are crimes that run into tens of thousands of pounds,” he says.

“So much time and energy is invested in those animals, so to see them stolen, potentially butchered in the field, not treated properly and put into food markets in ways that they shouldn’t be, it is not only a challenge for the farmer, but it impacts on the wider food chain.”

Aside from the financial loss, rustling has a psychological impact, Mr Uren adds.

“To have someone come to your farm, where you are living with your children, and take animals that you have been rearing and breeding, I don’t think words can explain just how serious a thing this is to a farming family that is living in an isolated area and already feels vulnerable.”

NFU Mutual says it regularly receives reports of 30-100 sheep being taken in a single raid. Many thefts take place during the hours of darkness, but others happen in broad daylight.

And each time farmers improve their security systems, criminals come up with new ways to circumvent them.

A “once and done” approach to security is no longer appropriate, says Mr Uren.

“You can’t just put up a camera and think ‘problem solved’. The criminals are evolving and we have to evolve with them.”

Last year, criminals responsible for killing and butchering sheep in fields in the Midlands were jailed and, in a further joint operation between Warwickshire and Northamptonshire Police, a man was convicted of the theft and slaughter of sheep in Rugby.

More recently, in January 2021, a 20-year-old man and a 16-year-old boy were sentenced in connection with the theft of a lamb in South Warwickshire.

Make a note of the vehicle registration numbers of unauthorised callers, and request business cards when approached by callers.

Although the cost would be prohibitive to fit trackers to an entire herd of cows or flock of sheep, there are emerging technologies that can help, such as TecTRACER which works by marking livestock with thousands of coded microdots that become entangled in fleeces and coats and will link an animal back to its home farm.

Encouraging the public to report suspected livestock theft is an approach being taken in some areas to tackle this crime.

A new awareness campaign has been launched in Devon in response to ongoing regular thefts of sheep in remote areas such as Dartmoor.

The moor’s unfenced roads and sparse population make it attractive to rustlers who have skills to round up sheep, transport them, and have a market for illegally slaughtered and butchered meat.

The Devon Livestock Initiative has been launched by NFU Mutual in conjunction with Devon & Cornwall Police. 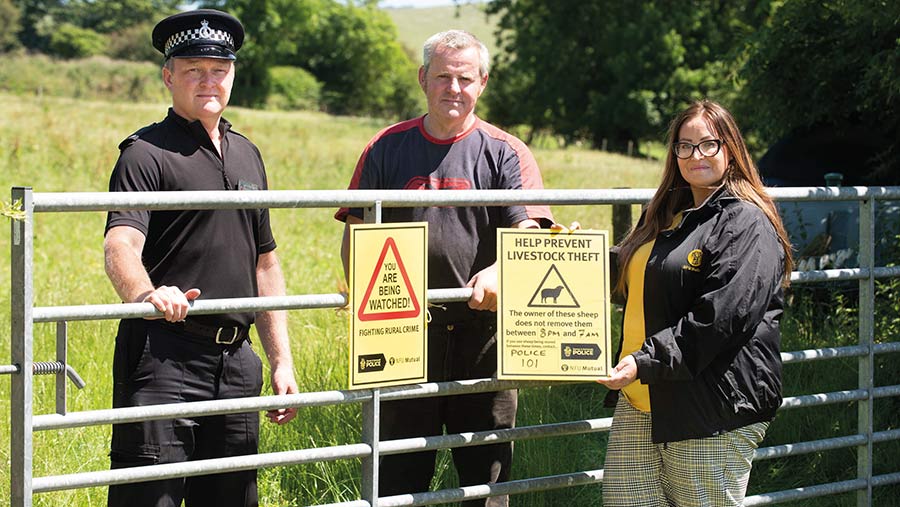 The project’s key aim is to encourage people who are out and about in the countryside to report suspicious activity to local farmers.

Farmers are being provided with gate signs which include the times that stock are normally moved.

Members of the public who see sheep being moved outside these times are asked to call a phone number displayed on a sign for a local farmer, or to call the police on 101.

PC Martin Beck of the Devon & Cornwall Police Rural Crime Team says people may not realise they are witnessing a theft or crime, so putting these signs up helps raise awareness of activities which are unusual.

Although the initiative is currently operating only on parts of Dartmoor, if it is successful it will be rolled out across Devon and Cornwall, in regions where farmers and parishes have theft concerns and would like an opportunity to work together.

The initiative is part of a wider project being run by Devon & Cornwall Police, with support from NFU Mutual, to trial a range of security measures to prevent and detect livestock theft.

Colin Abel and his brothers, who farm on Dartmoor and were among the first farmers to take part in the pilot scheme, estimate their business is losing 200 sheep a year to thieves.

“The situation is getting worse. For small farms, the risk of having stock stolen is now making it too risky to graze sheep on the moor,” he says.

Flintshire sheep farmer Robin Ellis Clwyd is convinced that the thieves who took 50 shearling ewes, worth about £10,000, from a field last month are the same ones who struck in the same field three years ago.

Mr Clwyd rents the field near Northop as grazing for his flock of 1,000 White Faced Mules and Texel-cross Mules.

The gate was secured with a chain and padlock, but when Mr Clwyd visited the field to check on the sheep he found it wide open.

The theft in September was almost three years to the day that 40 of his sheep were taken from that field.

Even the lock that the chain was attached to was taken. “What is the use of that lock without a key?” Mr Clwyd asks.

Although he is insured, that won’t cover his loss fully because of the price uplift in sheep since he renewed his premium.

“Prices have rocketed since then, so I am under-insured. I reckon most livestock farmers in the UK are under-insured,” he says.

Mr Clwyd is still renting the field but admits that he will in future be very wary of how he uses it.

“There is a footpath running through it and it comes out next to a main road. That’s why we always locked the gate, to stop walkers leaving it open.”

Mr Clwyd says he appreciates the work that police rural crime teams do around livestock rustling, but that criminals rarely seemed to be caught.

“I remember reading not so long ago about someone who had been prosecuted, but there seem to be very few convictions.”

His shearlings were double tagged and he is hoping that the distinctive markings on their fleeces – a large blue ‘E’ on their right-hand side – will help him to trace them.

“It is not the season for shearing, so these animals will either still have that letter on their fleeces, or they will have been shorn, which should set alarm bells ringing,” he says.