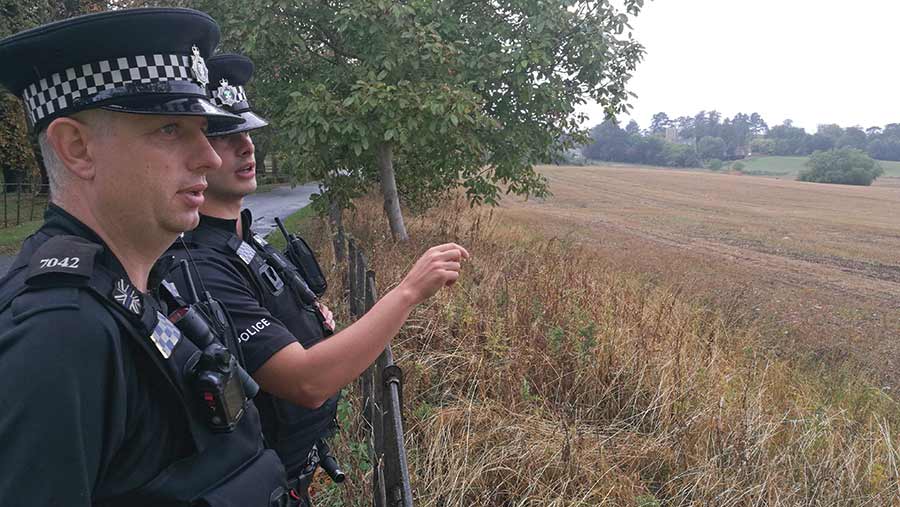 It’s a drizzly mid-September morning as I travel to Buckinghamshire ahead of “Operation Agriculture”.

The operation is a week-long crackdown on rural crime affecting farms and the countryside in the Aylesbury Vale Local Policing Area (LPA), a 350sq mile area covering Aylesbury, Buckingham and rural parts.

PC Ian Carter and his policing partner PC Bryn Walsh, both constables on the Winslow Neighbourhood team, usher me into a patrol car following a team briefing.

We head to Mentmore village, near Leighton Buzzard, where farms have faced persistent problems with hare coursing – the illegal pursuit of hares by dogs.

We reach the top of a village hill and an arable farm comes into focus. Apart from the odd bale dotted on the horizon, the fields are bare after harvest.

The car stops and we get out. PC Walsh scans the scene – but no one is there.

He tells me that recently coursers are targeting farm fields with good 4G mobile connections so that events can be streamed live online, or through social media.

“We’ve found that with hare coursing, we get people coming from far away. We have stopped people from Runcorn [Cheshire] down here with dogs and lamps at 3am,” adds PC Carter.

“They are travelling quite a distance to do it and often betting thousands of pounds.” 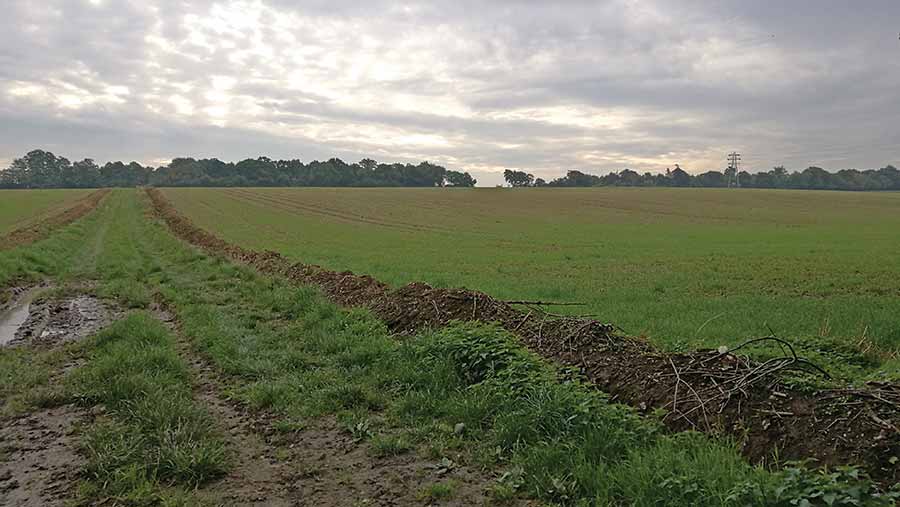 Thames Valley Police has bought two handheld infrared cameras that officers in Aylesbury Vale can use on night operations to tackle coursers.

They are also sharing intelligence with neighbouring police forces in Bedfordshire, Hertfordshire and Northamptonshire.

The use of automatic number plate recognition (ANPR) software is also helping to identify vehicles used by cross-border criminals.

What to do if hare coursing happens on your farm

The Country, Land and Business Association (CLA) has issued three tips for farmers and landowners who see hare coursing taking place on their land.

Both the CLA and police urge farmers not to confront hare coursers, but instead contact the police and record as much information as possible, including descriptions of people, their vehicles and number plates.

Officers in the Aylesbury Vale LPA engage regularly with farmers and communities at risk of rural crime.

“We tackle anyone in the community who commits crime. We do our best to identify offenders,” says PC Carter.

We get back in the patrol car and an alert comes in on the police radio. An offender has forced open a white van belonging to a grounds maintenance worker and stolen two hedge trimmers – worth £450 each – and a strimmer, worth £500.

The theft happened 10 minutes earlier in Weedon village – about six miles away. The offender, a white male, of skinny build, made off in a black Polo car with the boot open.

PC Carter presses the blue light and we tear off in pursuit. But after several minutes searching the village for the offending vehicle with no success, the search is cancelled.

PC Carter and PC Walsh drive to the victims. They take statements from Garden-Master company workers and hand them a police crime reference number.

The man in charge of policing in Aylesbury Vale is urging farmers to work with police to help make rural communities a safer place.

Supt Tim Metcalfe, local police commander for Aylesbury Vale, says farmers are the “eyes and ears of the countryside” and he believes sharing information is vital to tackling rural crime.

“We have been exploring new possibilities to work more closely with farmers, and using social media platforms such as Facebook and Twitter to share information,” says Supt Metcalfe.

“My key message to farmers is this: We need to know about rural crime. That means any photos, CCTV or phone footage is really important.” 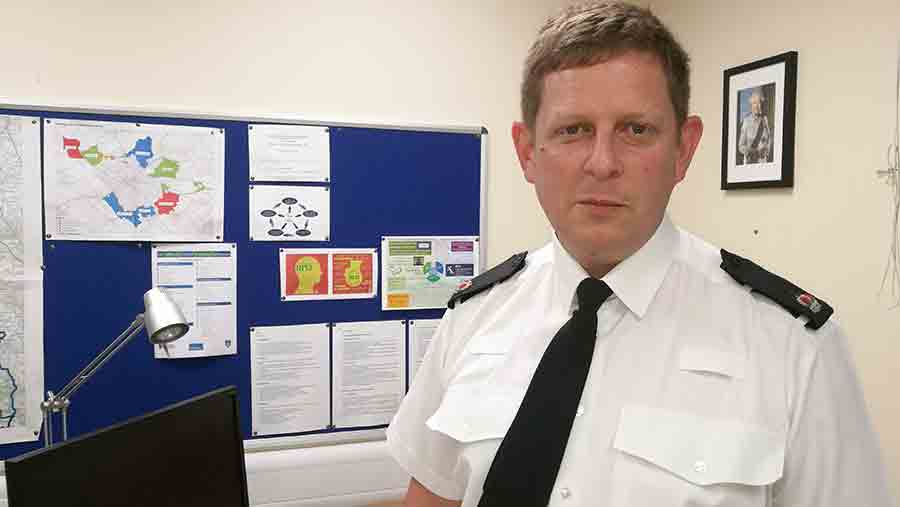 In recent months, the theft of tools from vehicles and farm buildings has spiked in the Aylesbury Vale area (see “Warning over gangs stealing farm tools”).

PC Carter says farmers should always check who they are renting barns to.

“Following a tracker activation, we went to one farm and in a rented barn found a stolen Range Rover and a stripped-down stolen Audi Q7, which had been stolen six months earlier,” he explains.

The officers urge farmers to fit tracking devices to all farm vehicles and machinery – even if it’s just a cheap tracker fitted under the bodywork.

While we are returning to Aylesbury Police Station, we get another radio alert.

Police have arrested two men on suspicion of drugs offences on an Aylesbury estate. One suspect is resisting arrest and colleagues need help.

We arrive on the scene and PC Carter and PC Walsh work with colleagues and police community support officers (PCSOs) to apprehend both suspects.

PC Carter and PC Walsh then help colleagues search the suspects’ car. They find drugs paraphernalia, an illegal knuckle duster and a large amount of cash.

All items are bagged and taken to the police station to be kept as evidence.

When we arrive back at the station, PC Walsh tells me: “We’ve had 1,300 incidents in the Aylesbury LPA in the past two weeks. If you took one hour to see every victim, it would take you 162 days. It’s not possible.”

Farmers often accuse police of not taking rural crime seriously enough and concentrating on urban crime. But with budgets and resources stretched, I saw first-hand that police are trying their best to fight crime.

Farming communities can play their part too by staying vigilant and reporting all crimes.

Organised criminal gangs are targeting farms to commit high-value burglaries and thefts of machinery and tools in the Aylesbury Local Policing Area (LPA).

“We have had some really high-value burglaries from businesses of machinery and tools. It’s quite a sophisticated form of criminality,” says Supt Tim Metcalfe, local police commander for Aylesbury Vale.

“Similarly, with van thefts, it’s an enduring challenge of making sure we are catching and convicting thieves and recovering and returning stolen property.”

In February, officers recovered more than 2,000 stolen tools locked in containers in Aylesbury and Milton Keynes as part of a Thames Valley Police operation.

Some of the victims have been identified as farmers who have had tools stolen from outbuildings.

Tools have been reunited with victims from the Thames Valley as well as 16 other police force areas, including Kent, Avon and Somerset and Norfolk.

Six men have been arrested on suspicion of handling stolen goods. All have been bailed pending further enquiries. 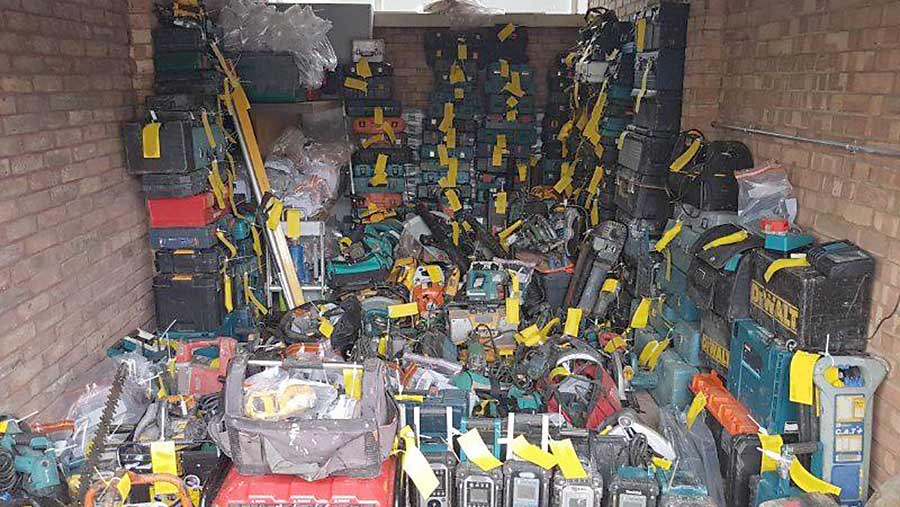 Police are urging farmers to mark tools, take photos, keep a note of their serial numbers and register them on a national database to help prove ownership in the event of theft.