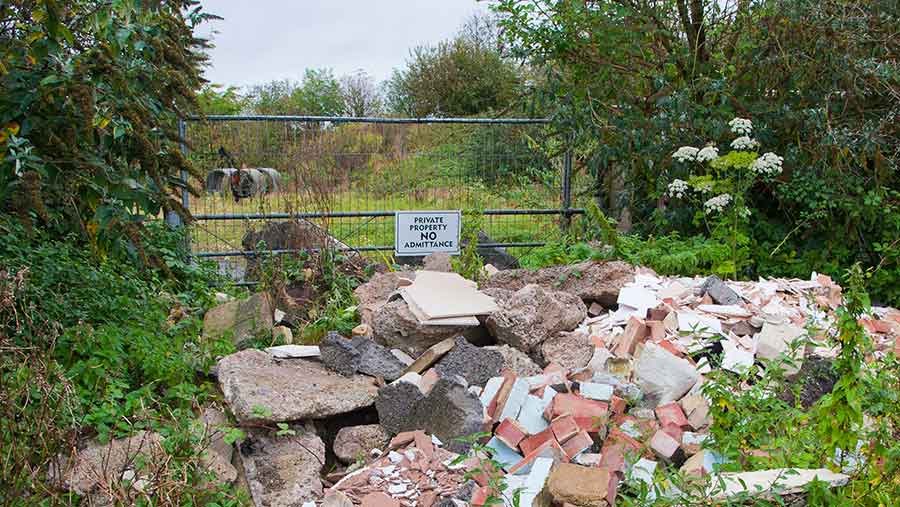 Farmers are being urged to sign a petition calling for tougher penalties for unscrupulous fly-tippers who dump rubbish in the countryside.

More than 430 people have signed the petition, which calls on the government to urgently increase the penalties for fly-tipping on farmland.

Currently, under UK law anyone caught illegally dumping rubbish can be jailed for up to 12 months and fined a maximum of £50,000 in the magistrates’ court, but 95% of the fines issued are less than £1,000.

However, landowners are liable to remove waste dumped on private farmland, leaving them to pick up the clean-up bill, which can often run into tens of thousands of pounds.

The petition says: “Incidents of large-scale, illegal fly-tipping are occurring far too frequently and the fly-tips are almost on an industrial scale, especially in rural areas.

“It is obvious to all that organised criminals have become involved and are profiting from fly-tipping. There is no doubt that the crime of fly-tipping is having a serious effect on the countryside, wildlife and communities – it can’t be allowed to go on.”

Essex farmer Ed Ford, who has signed the petition, said his farm in Brentwood is targeted on average once a week by fly-tippers. He has also been hit on three separate occasions by commercial fly-tippers.

“There are between five and 10 loads of fly-tipped waste dumped every night in our area. There just isn’t enough resource to tackle these people,” he added.

“It costs us thousands of pounds to clean up fly-tipped waste on our farm. If we claim it on the insurance, our premiums go up. Also, the government gets more money in insurance premium – but why should they if they are doing nothing to tackle it?”

“Bigger fines would help. But unless they catch those responsible, what’s the point?”

In his area, he said the Environment Agency had also downgraded its fly-tipping team from six people to one person, because they were focused on putting more resource in other areas, such as flood prevention.

Meanwhile, increased charges at council household waste sites have led to a rise in rubbish being dumped in the countryside.

The Country, Land and Business Association (CLA) is backing calls for tougher penalties for fly-tippers.

CLA East regional director Ben Underwood said: “We need to use the full force of the law to punish people who think it is acceptable to dump their rubbish in the countryside or on private farmland.

“An example should be made of offenders so that others can see that it is simply not worth dumping rubbish illegally – it will also serve as a way of educating people on how to dispose of their waste lawfully and responsibly. Ignorance of the law should be no excuse.

“MPs need to take note of this blight on our countryside and put pressure on the courts to enforce a much higher penalty to those that flout the law. There is no deterrent if the fines imposed are going to cost criminals less than disposing of the rubbish legally.”