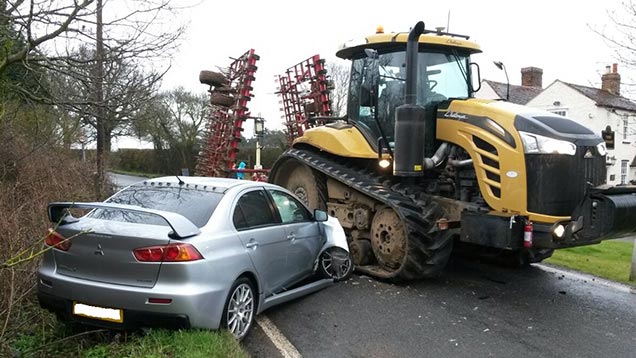 Police are hunting three people after a sports car was involved in a collision with a tractor.

The crash happened at 9.55am on Sunday (29 March) in Church Road, West Hanningfield, Essex.

The front of the silver Mitsubishi Evo was crushed after the accident with a yellow Challenger outside the Three Compasses pub.

The three men were seen leaving the scene on foot towards East Hanningfield.

Landlady Rosemary Cotton told the Essex Chronicle: “I was cleaning the pub in the morning and heard a loud bang.

“There wasn’t much I could see because the large tractor was in the way, but I suspect they were probably both going too fast. It is a very dangerous little bend.”

Essex Police have released an image of a man they would like to identify in connection with the incident.

Anyone with information is urged to contact PC Alan Lamb at Chelmsford Road Policing Unit on 101.