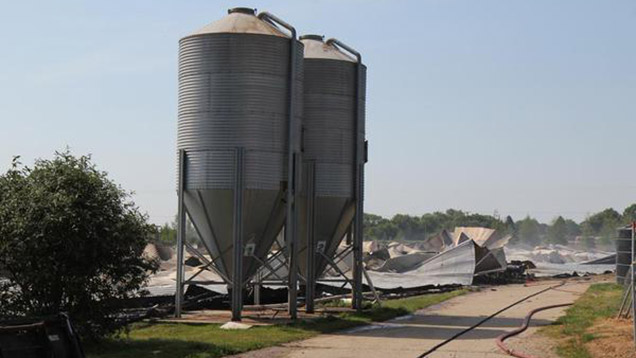 Police investigating a fire at a poultry farm that killed 13,000 chickens are appealing for help to trace three men.

The fire at Sparlings Farm, in Braintree Road, Felsted, Essex, which broke out around midnight on 11 June, is being treated as arson.

The 100x20m barn burned down and all the chickens and egg production equipment was destroyed.

Essex Police have appealed for information about three men who had visited the farm a few days before the incident.

Det Sgt Mike Pannell, of Braintree CID, said: “We are continuing our investigations and have been conducting further forensic examinations.

“We are also very keen to get more information about three men who had called at the farm on Sunday 7 June trying to buy fuel.

“They were driving a white Ford Transit tipper lorry and were unhappy when their request to buy diesel was turned down.

“If any other farmers or businesses in the area were approached by these men in recent days then I would very much like to hear from them.

The owners are “devastated” by the loss of the free-range hen shed and its contents, police said.