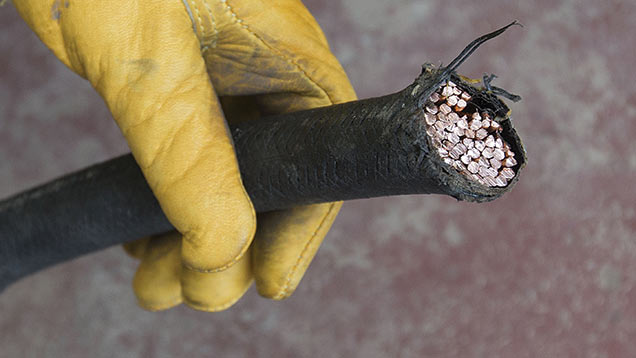 Thefts of overhead power cable have soared in central Scotland, putting farmers at risk of electrocution, according to Scottish Power Energy Networks (SPEN).

The provider, which operates the electricity transmission network in the south of Scotland, has seen more than 40 thefts or attempted thefts of overhead power lines in Ayrshire, Lanarkshire and central Scotland in the past four weeks.

Since 2011 there have been 950 thefts and more than 7,000 man-hours have been spent on repairs and reinforcements.

The company has now appealed to farmers to report any suspicious behaviour they see near power lines and offered a reward of up to £10,000 for information that leads to a conviction.

“We have seen livestock killed but fortunately no member of the public has touched a live wire while it has been on the ground. That’s my worst nightmare. It keeps me awake at night.”
Guy Jefferson, Scottish Power Energy Networks

“The lines carry 11,000 volts and thieves are targeting rural locations, often in the middle of the night.

“One false move can lead to a fatality. These people clearly have some idea of what they’re doing because they’ve got away with it until now without injury,” he said.

“We have seen livestock killed but fortunately no member of the public has touched a live wire while it has been on the ground.

“That’s my worst nightmare. It keeps me awake at night.”

Mr Jefferson said that surveillance had been stepped up in recent weeks and Police Scotland was working on the case, but it was impossible for his staff to patrol tens of thousands of square kilometres every night.

He added that the metal was most likely being stored and taken out of the country in containers through the docks.

Linlithgow farmer Alan Robertson was exposed to the risks of cut overhead cable when he went to check his livestock in a field neighbouring a quiet lane.

“I noticed there was wire hanging down from the poles, which had burned right through the fence,” he said.

“The thieves had also left their ladder behind. As the cable was on the fence my main concern was that it was still live.

“It could’ve been fatal because the fence was most likely live as well and if I’d got close to it I’d have been electrocuted. It was really dangerous.”