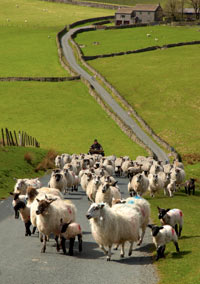 Northamptonshire Police are appealing for witnesses to a road rage incident between a sheep farmer and the driver of a red sports car.

The farmer was moving his sheep across Quinton Road, Wootton, at about 1.30pm on Thursday (24 September)

when a motorist tried to drive through the flock.

A 44-year-old woman was driving the car when she tried to edge through the flock of sheep.

She claimed the farmer remonstrated with her and dented the passenger door with his fist.

A police spokesman said: “An altercation occurred between a white male who was in charge of a flock of sheep and a woman driving a red Alfa Romeo car.

“The car was slightly damaged in the incident.

“It is believed the occupants of two or three other vehicles witnessed the incident.”

Witnesses or anyone with information are urged to call Northamptonshire Police on 03000 111 222.