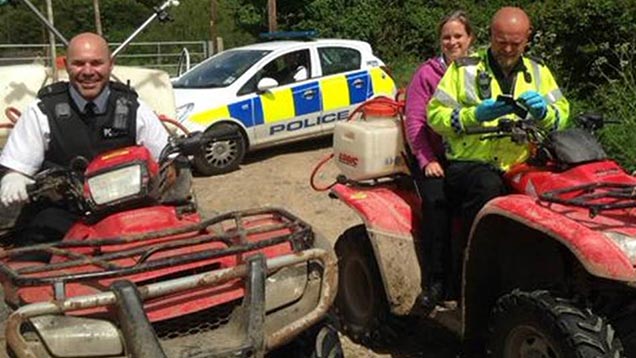 Police have recovered a pair of stolen quad bikes hidden in a hedgerow thanks to tracking technology.

A rural crime team, a force helicopter from Avon and Somerset Police, local officers and officers from Wiltshire zoned in on land off Whitechapel Lane in Frome at about 11am on Monday (12 May).

They found the stolen bikes stashed away in a hedgerow shortly afterwards.

Supt Geoff Wessell, rural crime lead at Avon and Somerset Police, said: “I’m really pleased we’ve been able to recover a couple of pieces of valuable farm machinery so soon after they were stolen.

“Successes like these highlight the importance of our work with our neighbours and the need for everyone to use tracking technology to protect your property, whether it’s a quad bike or an iPad.”

Police are hunting those responsible for the thefts and an investigation is under way. Anyone with information on either burglary is asked to call 101 and quote crime reference 48412/15.

Thousands of members within the Farm Watch and Horse Watch schemes across Avon and Somerset also benefit from an intelligence-sharing service provided, regarding local crime, which might affect them.