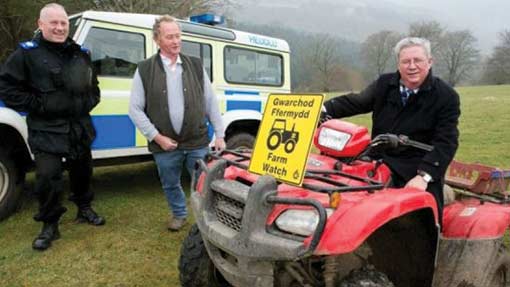 Farm crime in one Welsh county has been cut by more than a quarter thanks to a network of text messaging and email alerts.

The Online Watch Link (OWL) has been so successful in Gwent that police said it has contributed to 27% fewer crimes there in the last five months.

Beef and sheep farmer Howard Vicary, who has had three quad bikes stolen in the last five years, said he is no longer bothered by thieves. There had previously been regular thefts of diesel and workshop tools.

Mr Vicary is one of 800 farmers in Gwent registered with OWL. He telephones the Gwent Farm Watch coordinator if he sees suspicious activity locally and that coordinator, Allan Mills, sends out an alert.

“I’m not great with text messaging but with OWL you can telephone and email too,” said Mr Vicary, who runs a flock of 2,000 breeding ewes and 120 suckler cows at Ty Oakley, Crumlin.

“It keeps everyone in the loop and the criminals know this so they keep away.”

Gwent’s Police and Crime Commissioner Ian Johnston described OWL as a “great example” of police working with partners and members of the community.

He said the system enabled local policing unit commanders to have a joined up approach to identifying crime suspects.

The Farmers Union of Wales has supported the initiative by signing up new members.

Coordinator Mr Mills said the nature of farming meant farmers were often isolated. “OWL helps break down those barriers and helps us coordinate policing with them,” he said.

“It’s the way I communicate with all farmers quickly and I receive regular intelligence about suspicious activity which I wouldn’t have otherwise.’’

The numbers of farmers involved is a key to OWL’s success. “The increase in membership means =we’ve got hundreds of extra pairs of eyes and ears out there in the farming community and the farmers now feel they are getting a better service by having instant access to us,’’ added Mr Mills.