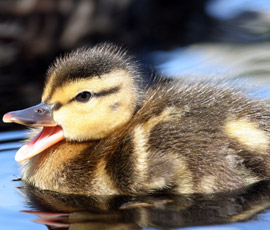 A thousand ducklings have been stolen from a game supplier in Shropshire.

The six-day-old birds, valued at about £1,500 were stolen between 11.30pm on 29 June and 5.30am the following day from Cheshire Game Supplies, on Sandford Industrial Park, Whitchurch.

Four sheds each containing about 270 ducks were found to have just 40-70 left the following morning. They were Mallard ducks for shooting, meat and conservation.

Andrew Grocott, owner of Cheshire Game Supplies, said that, following a spate of thefts about eight to 10 years ago, he put security in place to check the game sheds throughout the night.

“They must have known what they were doing,” said Mr Grocott, “They got in and out as fast as possible, and must have used something like chick boxes or crates.

“There would also have had to have been a heat source, feed and water ready wherever they were going.”

Mr Grocott added he was “waiting for somebody to drop a word somewhere”, and that he would alert other suppliers and game buyers across the country.

A spokesman for West Mercia Police said: “This is an unusual theft involving a large quantity of small birds. We would also urge people to make contact if they are offered day-old ducklings for sale in dubious circumstances.

“We are appealing to anyone who spotted suspicious activity in the area late on Friday night or in the early hours of Saturday to contact Whitchurch police station on 101.”

Information can also be given in confidence to the Crimestoppers charity by calling 0800 555 111.

Find crime in your area on our Crime Register