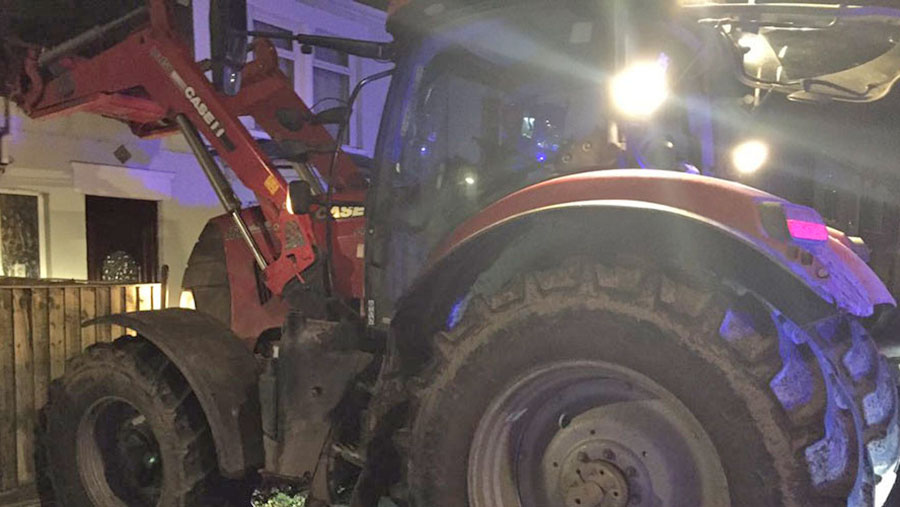 A man who stole a tractor and led police on a 15-mile low-speed chase across two counties has been jailed for eight months.

Nathan Lovell, 25, from Wisbech, Cambridgeshire, stole red Case 160 Puma tractor from a farm in Tilney St Lawrence in Norfolk and drove it for about an hour on the evening of 16 January, reaching speeds of up to 10mph.

He stole the vehicle because he wanted to be sent to prison, Norwich Crown Court heard. Although he had not been drinking or taking drugs, Mr Lovell was on licence for another offence and had a history of depression.

He was chased by six police cars and a helicopter before leaping out of the vehicle while it was still moving and continuing his getaway on foot.

The tractor came to a halt in a cul-de-sac in Wisbech, with its bucket raised, narrowly avoiding a nearby house.

Police soon caught up with him and he was arrested at the scene and subsequently charged with theft of a motor vehicle, failing to stop and driving without insurance.

He caused £200 of damage to crops and smashed through a £300 set of gates, the court heard.

Mr Lovell pleaded guilty to aggravated vehicle-taking, dangerous driving, failing to stop and use of a vehicle without third-party insurance.

He was banned from driving for 28 months by judge Anthony Bate, who described the incident as a waste of police resources and said it was a mercy nobody was hurt.