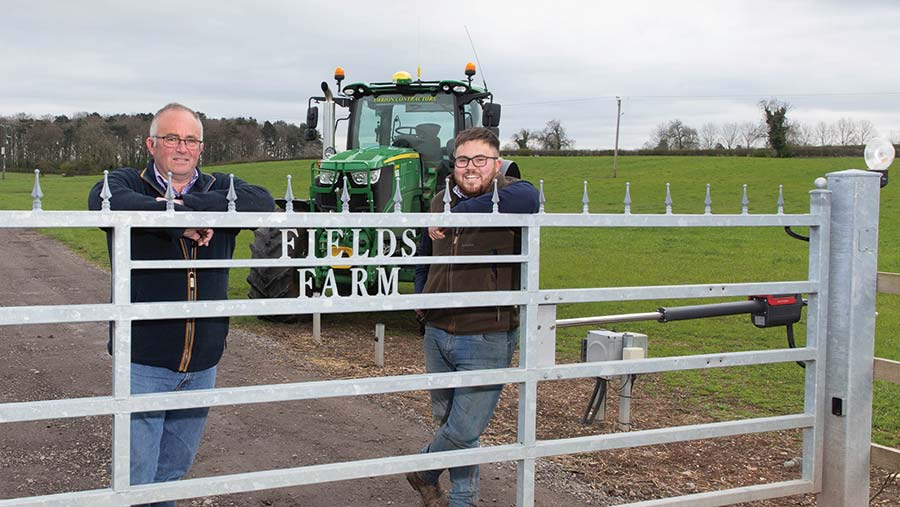 Farmers from Ambion Contractors Ltd, near Sutton Cheney in Leicestershire, in the shadows of the Bosworth battlefield, are engaged in their own battle – the constant fight against rural crime.

They have been turning their yards into fortresses to protect their properties against the crooks.

Our news editor Philip Case visited Mr Saunders and his neighbours to see what effects the measures have had on keeping out the criminals. Read the report and watch the video below.

Leicestershire farmer and agricultural contractor David Saunders has a theory as to why tractors are so desirable for organised criminal gangs – it’s their centrally mounted steering wheels.

“If you nick a right-hand-drive car here, you are limited to where it can go – India, Australia, New Zealand, Japan and a few other countries,” he explains.

“But when the steering wheel is in the middle, like a tractor, it can go anywhere in the world.”

It’s a valid observation, which goes some way towards illustrating why he and many of his neighbours have fallen victim to machinery thieves over the past few years.

Mr Saunders farms in partnership with his son, Jim, at Fields Farm, a 48ha tenant farm, in the village of Sutton Cheney.

Of the seven farms in his parish, including his own, all have been hit by rural criminals in recent years, Mr Saunders reveals.

“Rural crime is getting worse and farmers have got to wake up to this. A neighbour has just been done: he had all the equipment taken out of his garage,” says Mr Saunders.

“Sometimes it can feel like living in Dodge City. Our workshop has been raided twice, and we have had two machines stolen – one was recovered, thanks to the police being able to use our information.

“We are very aware and very proactive. But you have to draw a line in the sand. Otherwise, you can become paranoid.”

Over the past two-and-a-half years, the Saunders have spent about £27,000 on security. 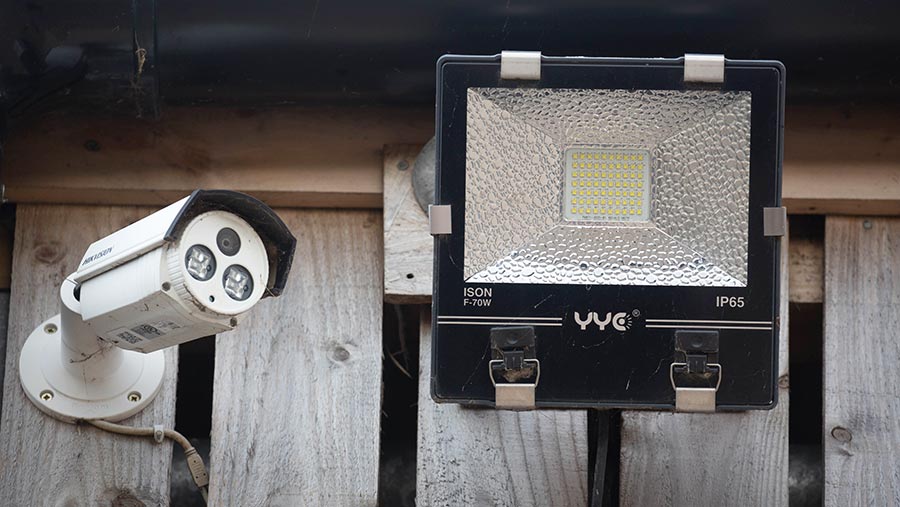 Mr Saunders says the trackers have already been money well spent, after they helped in the recovery of a 16t JCB JS160 excavator, stolen from Congerstone last May.

“The excavator was stolen at 6am on 27 May by two local men from the Market Bosworth area and it was back in my yard on my low-loader by 1.30pm the same day,” says Mr Saunders.

“It’s a full-tracking system with its own power unit, so if they take the batteries off the machine while it’s not running, it still works.”

The machinery is automatically immobilised between 11pm and 7am every day. “No one can move it without my knowing.”

Each machine has an invisible ring-fencing system around it so that if it moves beyond these times, a separate alert is sent to his phone.

He says the tracking system also doubles up as a full management system, which allows him to check employees’ timesheets and verify hours for invoicing purposes.

Meanwhile, a Teletrac Navman tracking system has been fitted to all the vans, which can help verify workers’ locations and give confidence with clients’ breakdown of costs.

In early 2017, the Saunders paid Lutterworth-based company Lime IT £8,000 for the supply and installation of CCTV cameras at the farm.

Cameras cover the farmyard, the gated main entrance, sheep shed, workshop and public footpath to the rear of the farm.

The cameras are programmed to store footage for three weeks, which can be useful in the event of a health and safety issue.

They can also be used as a management tool to keep sheep under surveillance or locate farmworkers. “They save me traipsing around the fields for miles, because if I need to see someone I know exactly where they are,” says Mr Saunders. 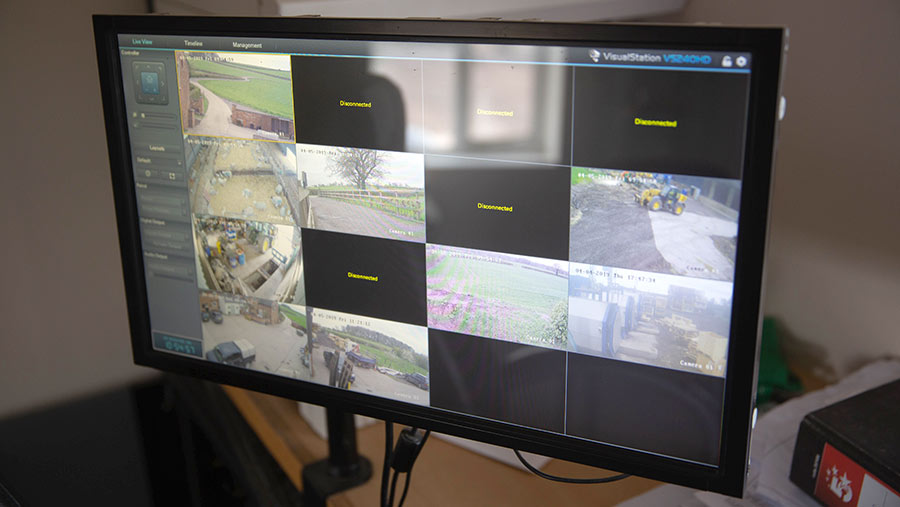 The live camera footage is also sent to his phone, which allows him to keep an eye on his farm from anywhere in the world.

Floodlights have been installed so that the yard is always lit up after dark.

Access to the farm used to be via a wooden gate at the main entrance, which was kept unlocked in case of an emergency.

But the farm has upgraded to an electric gate, which is operated by a keypad or mobile phone and monitored by a camera. 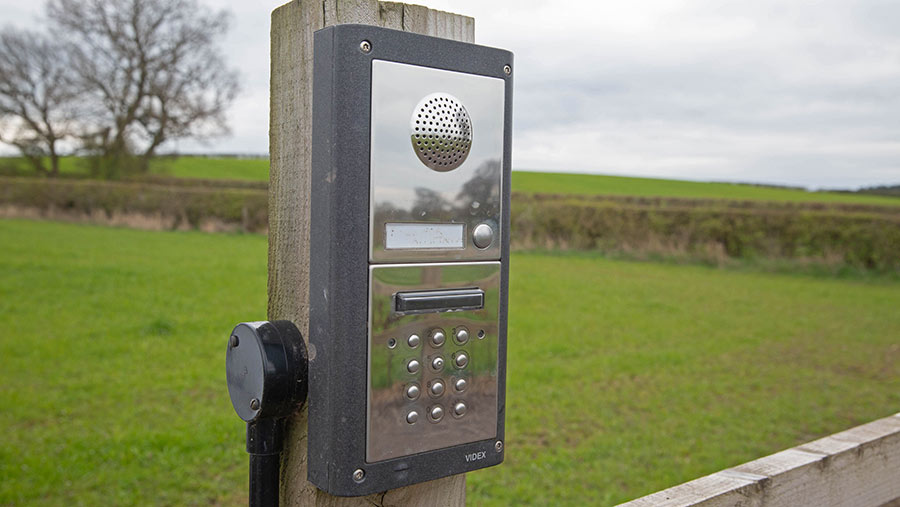 “It has been the best thing we have ever done. We are 500m off the road. We have no close neighbours,” says Mr Saunders.

“We get about 100 vehicle movements in and out of the farm each day. It makes us feel safer to monitor who is coming up and down the drive.

“It has also reduced the hare coursing massively. Previously, they would come halfway up the drive, let the lurchers off each side of the Transit van and just obliterate all the hares.”

The driveway is curved – which means number plates can be recorded by the camera as soon as a vehicle approaches the gate.

The workshop at Fields Farm was raided in 2005 and more recently in December 2017. A double-locking security door has since been fitted at each end of the building.

The doors are barricaded each night with stillages, and telescopic loaders are placed near the doors and immobilised.

All the fuel is locked away. Hard hats and goggles are also locked away to prevent any raiders using them for disguise, as happened in the last raid.

How police are helping

“Farming is fantastic for bush telegraph. But farmers are no good unless we give the bobbies information,” says Mr Saunders.

“So many farmers complain that the police don’t do enough, but we value their commitment to tackling rural crime.

“It’s all about information gathering. You could have 100 rural police officers, but if they don’t know where to go, it’s pointless.”

He adds: “Everyone can do their bit. You don’t have to spend thousands. Locks on all gates and a simple tracking system for tractors and telehandlers would be my best advice.

“We don’t feel oppressed. But farmers have got to turn the negative energy into positive energy, make a bit of a stand and fight back.”

‘Rural crime has got worse over past five years’ 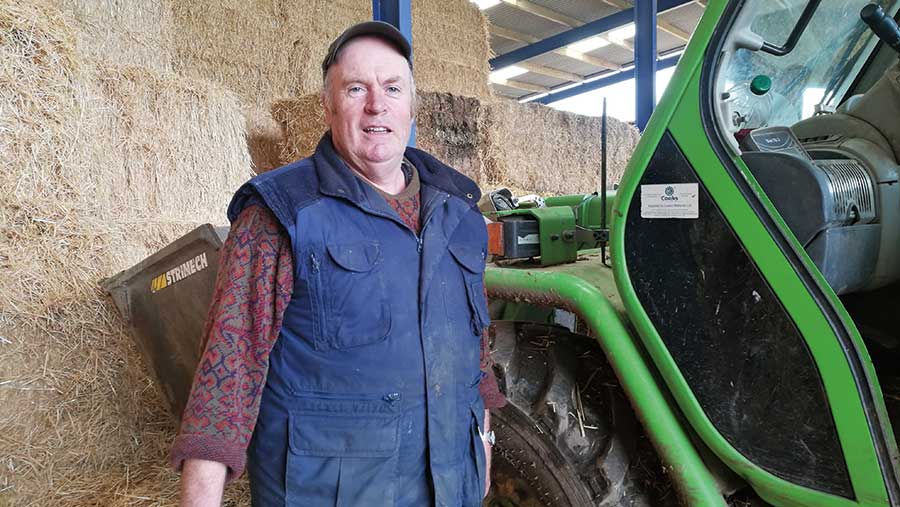 Farming neighbour Roger Jarvis has also beefed up his farm security after a number of raids in recent years.

A cattle trailer, a John Deere loader, thousands of litres of fuel, workshop tools and tractor batteries are among the items that have been stolen.

At Lodge Farm, in Stapleton, Mr Jarvis has installed two electric gates and CCTV cameras, at a total cost of £18,000.

He says: “Rural crime has got worse and worse over the past five years. Hopefully, it has peaked now as people are doing something about it.

“We put two gates up in December 2017 and it has worked. Touch wood, we have had no trouble since.”

In particular, Mr Jarvis says the CCTV cameras have given him peace of mind.

“The cameras have been a real asset. If you can get faces recorded on camera, you can catch criminals. We haven’t had a bit of bother since we installed them, so we must have done something right.”

People who join the Leicestershire Rural Watch scheme are encouraged to become part of an alert system called FastText that will keep them informed of what’s happening where they live and work.

PC Rob Cross, a rural police officer based at Market Bosworth, says: “We have more than 500 farmers signed up to the scheme.

“The more eyes and ears out there, the better. We are absolutely reliant on people to give us the information.

“Our biggest concern is farmers not reporting incidents to police. One in three rural crimes doesn’t get reported to us now. I can’t stress enough the need for all farmers to report all incidents to help us build up a picture.”

To become a member of the scheme, email your name, address and contact details to rural.watch@leicestershire.pnn.police.uk