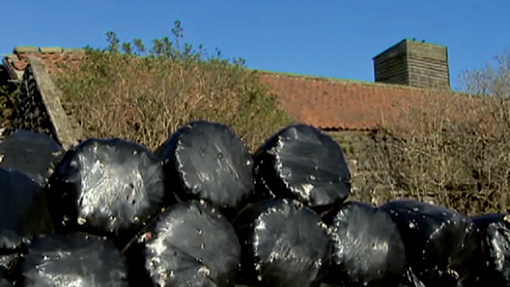 Hundreds of tonnes of industrial waste disguised as silage bales have been discovered on a disused farm near Edinburgh Airport.

The haul of 600 bales was dumped in the farm steadings and sheds in July this year and the Scottish Environmental Protection Agency (SEPA) is now appealing for witnesses.

It is estimated it would have cost £60,000 to legally dispose of the 200t of building rubble, paper and clothing that was hidden in the bales.

SEPA say this is the first time they’ve been aware of waste being deliberately disguised as agricultural produce in Scotland, although a spokeswoman said it was understood there have been cases in other parts of the UK and in Europe.

The agency’s executive director Calum MacDonald advised farmers and landowners to review security on their properties.

“When intact the bales have the exact same appearance as an agricultural silage bale and this may be why this wasn’t noticed when the waste was deposited at the site,” he said.

“We would like to appeal for any witnesses who can potentially assist in this inquiry and would encourage them to call our pollution hotline on 0800 807 060.”

NFU Scotland’s regional manager for the Lothians, Kerry Barr said the union had also sent out a notice to farmers advising them to check any disused sheds to make sure nothing had been dumped.

“We’ve never seen fly tipping on this scale before,” she said.