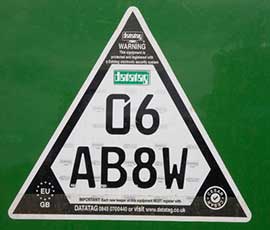 Farmers buying second-hand tractors can be assured they are not buying stolen kit thanks to a new online service which aims to uncover the hidden history of agricultural machinery.

The Cesar provenance check provides instant information on a machine’s past by identifying any inconsistencies in its identifying data, revealing if it has been stolen or is actually on finance.

Developed by security company Datatag in conjunction with vehicle history-checking company HPI, the service makes use of the existing Cesar scheme – a system which sees tractors, quadbikes and other farm machinery given unique “fingerprints” using high-tech security devices.

Installed in more than 130,000 pieces of agricultural kit and now fitted as standard on tractors by manufacturers including JCB and John Deere, the unique Cesar markings can be checked alongside police, HPI and Driver and Vehicle

“For someone looking for a piece of second-hand machinery from a dealer, auction or a private seller, the Cesar provenance check gives them peace of mind to establish a machine’s history,” said Kevin Howells, Datatag chief executive.

“We know auction houses and dealers are having to compensate farmers who buy kit which turns out to be stolen or on finance, so this gives everyone in the chain the confidence that the machinery has no hidden history.”

“With more and more manufacturers fitting Cesar as standard, thieves are becoming aware that new machinery is harder to steal and are looking to older pieces of kit instead.”
Kevin Howells, Datatag chief executive

Speaking at the launch of the system at JCB’s world headquarters in Rocester, Staffordshire, this week, Mr Howells said thieves were increasingly targeting older machinery, making the second-hand market one which needed extra vigilance.

“With more and more manufacturers fitting Cesar as standard, thieves are becoming aware that new machinery is harder to steal and are looking to older pieces of kit instead.

“Although it’s older it still has a value to someone, and the generic keys which used to be fitted as standard will usually still fit them, making them an easier target,” he added.

“We know kit fitted with Cesar is four-times less-likely to be stolen than other machinery and six-times more-likely to be recovered if it is stolen, and this new provenance check is an extra step in protecting farmers from the effects of machinery thefts.”

Roger Lane-Nott, Agricultural Engineers Association chief executive, said the checking system was another welcome tool for farmers in the battle against machinery thefts.

“Agricultural machinery is extremely vulnerable to theft and it hasn’t been helped by a generation of farmers who were very complacent about machinery security,” he said.

“Thankfully that complacency is changing as farmers realise they need to be more careful with equipment which is so important to them.

“We have to continue to move ahead with technology to ensure we stay ahead of the thieves, and this system is vital in helping us ensure fewer farmers are hit by the affects of machinery crime.”