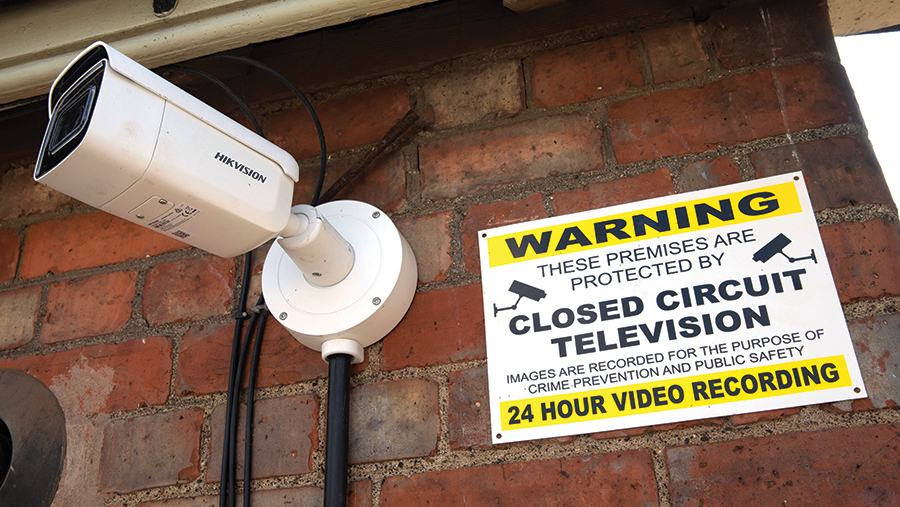 Abuse on social media can be hard enough to cope with, but dealing with the physical presence of anti-farming groups is a different matter altogether.

So what can farmers do to deter incursions in the first place and – if activists do succeed – keep themselves, their family, and their business as safe as possible?

We speak to victims about the impact vegan intrusions has had, and ask experts for advice on how to deal with protesters.

Farm trespass: where you stand with the law

The law in this area of “activist trespass” does not give farmers much comfort, particularly given that trespassing on someone else’s land is not a criminal offence, writes Julie Robinson, partner at Roythornes Solicitors.

It is, however, worth bearing the following points in mind:

How to deal with protesters

Case study: ‘It was intimidating and scary’

A normal Saturday morning took a dramatic twist for Sylvia Hook when her pig farm was stormed by vegan activists.

On 2 March last year, Mrs Hook was enjoying a quiet start to the day when she suddenly spotted dozens of cars across the road from her farm.

“I thought the hunt must be out somewhere,” she recalls. “But I went to have a closer look and saw people wearing Meat the Victims T-shirts, then I realised it must be us.” 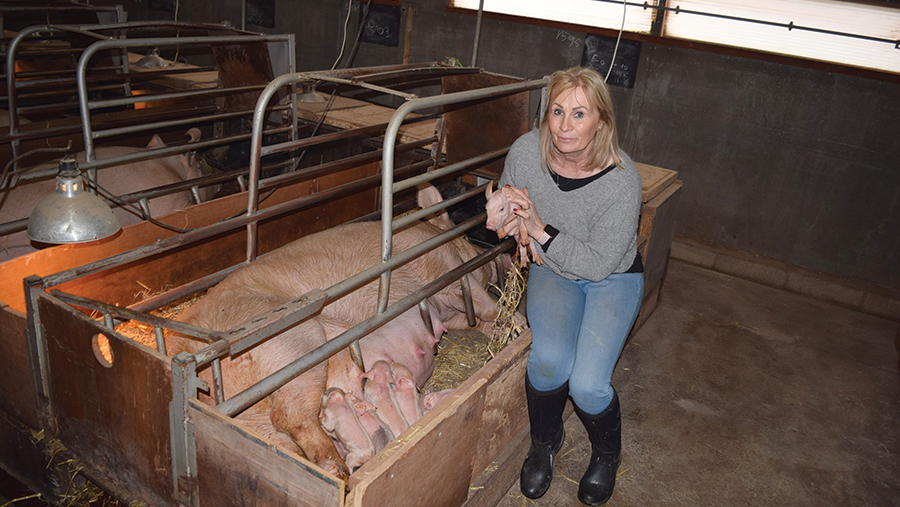 Mrs Hook went and questioned the activists about their aims, but said they just laughed at her. Shortly afterwards, they started to stream across the fields to the back of Sandilands Farm, a 600-650 breeding sow unit near Laughterton, Lincolnshire.

Mrs Hook, who runs the farm with her husband Mike, was present with only one farm manager – and they were powerless to stop them. About 220 activists entered the farrowing house and the rest stayed by the roadside with their placards.

“They looked like the Ku Klux Klan,” she says. “They had white suits on and on the back of their t-shirts it said: ‘We have a moral right to break unjustifiable laws.’”

Live streaming
Mrs Hook says the activists were carrying tulips, which are poisonous to pigs. She remembers a lot of chanting, people pointing cameras and streaming the event live on social media. “There was a lot of noise. The sows started jumping up and down – they thought it was food time. The piglets were squealing.”

Mrs Hook tried to have a reasonable conversation with the activists, questioning their motives, but says they just kept shoving cameras in her face. “One called me a ‘murdering b*tch’ and another asked if I would send my own children to a gas chamber,” she recalls. “It was really intimidating and very scary.”

After tolerating the abuse and failing to get a constructive dialogue, Mrs Hook left the building and called the police. She admits she lost her cool and would remain calmer if the same situation were to arise again.

Two PCSOs arrived and they radioed for more help. Riot police were redirected to the farm from a large fracking demonstration planned in the area, which was called off. Officers turned up with dogs, drones and a helicopter.

Mrs Hook says police were unable to make any decisions without talking to more senior officers. They decided the best policy was to try to contain the activists inside the building.

“Trespass is a civil and not a criminal offence, so the protesters knew they could be there,” she adds. “They are very savvy – they know the law. They know that as long as they don’t break anything to enter, as that would be a criminal offence, they can’t be arrested. I think the laws need revising.”

Pigs squashed
She returned to the farrowing house and says several piglets were squashed and the sows were jumping up and down. One activist claimed she was a vet and told her one piglet was dying. “I looked at the piglet. It was asleep and dreaming,” says Mrs Hook. “I gave it a prod. It woke up and then trotted off.”

The activists called the national press, local radio and press and TV companies and said they would not leave unless they turned up. But nobody arrived apart from a crew from the local radio station.

“All they [local press] were interested in was my version of events,” she says. If the press do turn up at a farm protest, she advises farmers to “put across their side of the story and not give them [activists] any air time or notoriety”.

An activist tried to take a piglet, but a police officer physically took it from them. “It’s very important that you don’t let them have anything,” she says. “We are farmers. We do what we can for our animals. What we do is right.”

Her biggest regret was not calling her vet the moment the activists arrived on the farm.

“If we’d done this, the police would have been able to get rid of them on welfare grounds. One of the biggest problems is we could not get in to feed the pigs,” she says.

Since the incursion, Mrs Hook has held talks with the NFU and National Pig Association. She recommends farmers create a list of vets on a rota in each county to call out to attend similar incidents on welfare grounds.

“If you have a livestock vet on the scene who says it’s a welfare issue, the police can remove them,” she explains.

The owners of a Kent abattoir, which was raided by members of animal rights group Animal Aid, are also calling for tougher penalties for trespassing activists.

Forge Farm Meats, based in Tunbridge Wells, was investigated by the Food Standards Agency and taken to court by the Crown Prosecution Service over alleged animal cruelty.

The case centred on undercover footage and allegations of two workers mistreating sheep, filmed by Animal Aid over two days in April 2017. But the case collapsed at Sevenoaks Magistrates Court in January after a judge raised doubts about the integrity of the filming.

The footage had been obtained by Ed Shepherd at the request of Animal Aid. Activist Luke Steele, who had previously been arrested several times and served 18 months in prison for harassment, hired Mr Shepherd to carry out the undercover operation.

In his ruling, Judge Paul Goldspring says he found Mr Shepherd to be “less than honest, evasive and defensive”, adding: “I’m satisfied that he acted illegally, had intel on how to enter without detection, and had implied or express permission to break [the] lock.”

During the case, the defence argued that by entering the stun room, Mr Shepherd was more than just a civil trespasser: he had committed a burglary, contrary to the Theft Act 1968, and had entered as a trespasser and caused damaged to a lock in doing so.

A spokesman for Forge Farm Meats says: “We have 36 cameras on this plant. We have got coverage for 90 days. Inspectors can go back and check anything they want. There’s nothing to hide.

“In this case, I would have to take a private prosecution. It’s such a long process. The trespassing laws are ludicrous.”

The spokesman urges farmers who are targeted to “stay calm”, call the police and “let them do their job”.

Last month, Irish dairy farmers Peter and Paula Hynes slammed animal rights group Peta UK for sharing a video of their daughter without their permission to drum up support for their anti-meat eating campaign.

The couple received praise from farmers and wider audiences for posting their response in videos on social media and debating the issues around dairying with Peta UK on local radio.

They are demanding that Peta UK takes down the video and have sent complaints to Twitter, the Advertising Standards Authority and the Charity Commission.

Mr Hynes says: “The reaction from the farming community and others has been tremendous. So many people have reported Peta’s tweet and asked Peta to remove it.

“I don’t see why any animal rights organisation should bully me. I don’t enforce my views on anyone else. Likewise, I don’t expect them to impose their views on me.”

Egg producer Hoads Farm near Hastings in East Sussex has been targeted by vegan activists, and was subject to an incursion on 27 January by the Brighton branch of international group Direct Action Everywhere (DxE).

According to newspaper reports at the time, around 150 activists occupied a shed housing free-range layers for nine hours, while others blockaded the farm entrance. 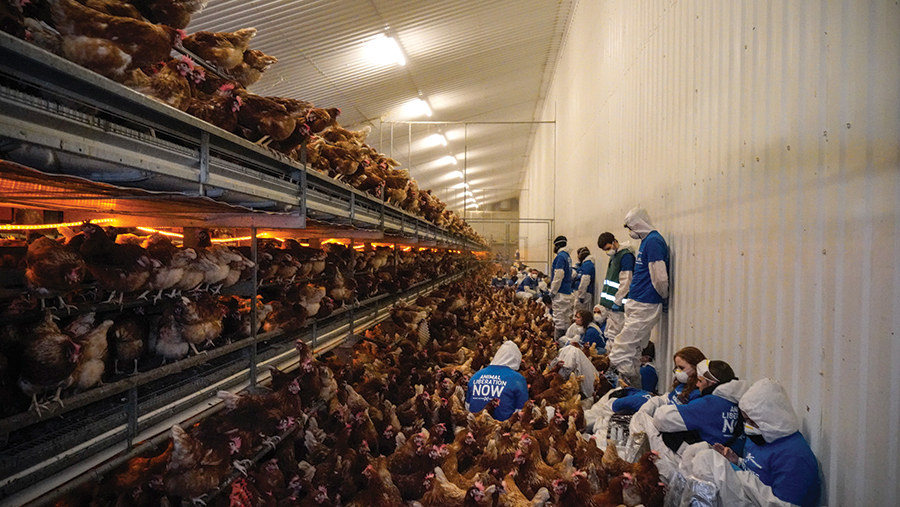 Photographs and a video released by the group purported to show substandard conditions, while another video showed the activists leaving, wearing overalls and masks, and carrying away about 50 birds for rehoming.

As well as the negative media publicity, the farm had its RSPCA Assured accreditation suspended while under investigation, and the business lost sales to major retailers.

The owners of the farm insisted its facilities were up to scratch and claimed the activists’ incursion had not only stressed the birds, but had also damaged the property and compromised biosecurity.

Veterinary inspections on the day found no welfare breaches, though the company did question the integrity of some of the images circulated by the activists on social media.

Follow-up visits by Defra and the RSPCA resulted in the farm being given is assurance status back just three weeks later.

The Brighton branch of DxE has since changed its name to Anti-Speciesist Resistance in order to “move forward through creating our own values, such as incorporating an anarchist and radical anti-oppression theme into our narrative”.

Farmers Weekly contacted the group to ask about the motivation behind such incursions, the acceptability in terms of trespass and theft, and their thoughts on the effect on human and animal welfare of their activities.

While declining to answer most of our questions, the group said it aimed to expose “speciesism”, described as “the assumption of human superiority over other animals”.

“Animal rights activists recognise non-human animals as individuals who have their own subjective experience of life and their own understanding of the world around them,” said a statement.

“Activists do not want to harm humans, but we see human and animal needs as equally important and their oppression as being interlinked.

“The aim is to stop the unnecessary use of animals in farming and shift towards plant-based lifestyles and a world where non-human animals are free and protected the same way as humans.”

Further planned incursions by the group have been put on hold due to the coronavirus outbreak.