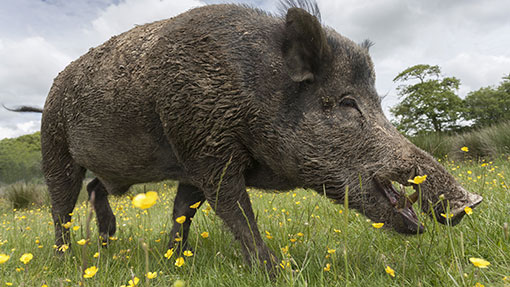 Twenty-one wild boar are on the loose after they were set free during a farm burglary.

Police have warned that the animals could be roaming the countryside after they were released from a pen at farm in Llangynwyd, near Maesteg, Bridgend.

Wild boar can travel up to 30 miles a day and can potentially attack other livestock.

South Wales Police are warning that although the animals are not an immediate threat to public safety, they may charge anyone who tries to approach them as the boars will be disorientated, confused and are not used to being out of their pens.

Anyone who sees the animals is advised not to approach them and call police on 101.

Six people have been arrested in connection with the release of the animals during a raid on the Brynmynach farm near Maesteg at about 12.30pm on Sunday (27 April).

Police said the farmer holds a dangerous animals licence and had fencing to prevent the animals from escaping.

Inspector Paul Thomas said: “These animals are recognised as posing a potential threat. People should take as much care as possible.

“We are investigating the criminal damage and the release of dangerous wild animals, which can carry a sentence in prison.”