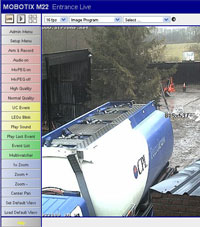 A new security set-up means you can now see what’s going on in your farmyard at the touch of a button from anywhere in the world.

The company, run by business partners Rob Cleminson, John Tumbridge and Chris Hossack, started six years ago, primarily to provide high-speed wireless internet to those unable to get broadband via their phone line.

“In the beginning we mostly dealt with farmers and landowners who wanted to offer high speed internet for converted offices and use it for their own businesses,” says Mr Tumbridge. “But as wireless technology evolved we started to think of other ways to use the system.”

One such way was to establish a security system which uses wireless technology and high resolution cameras instead of the analogue, wired setups commonly used in existing CCTV networks.

By using digital cameras, images are wirelessly sent back to a central hub and can be accessed remotely from any computer or handheld internet-enabled device by logging on to a secure, password-protected network.

“Most video evidence fails to qualify in court,” says Chris Hossack. “But the high resolution images and videos sent back to the hub are infinitely better, and we are even able to offer bolt-ons like number plate recognition.”

The system operates by sending information via radio signal from a transmitter on the camera to the farm office. These transmitters can be up to 25 miles apart as long as they are in the line of sight of each other, allowing large tracts of land to be covered with one installation.

There are five camera lenses available, including 360°, fish-eye, long distance and even dual lens options. “By using a dual lens camera, farmers can opt for a set-up which covers both a specific area and the farmyard as a whole,” adds Mr Tumbridge.

The cameras themselves are vandal-proof and have an operating temperature range of -30C to +60C. They can be powered by battery, mains, solar or wind depending on the situation. Covert cameras, installed in railway sleepers or breeze blocks, are also offered and even the standard cameras have built-in loudspeakers and microphones to allow two-way communication with any phone or computer.

“Before we start, we’ll do a site survey and discuss what the farmer’s individual needs are, whether it’s the fuel tank, entrance, workshop or other area which needs to be covered and decide what cameras are required, how many and where they need to be positioned.”

Installation takes about a day, and the system can work either with Airzone’s wireless broadband or the farm’s existing broadband (if it has it).

Once the cameras have been installed, Airzone and the farmer work out exactly which areas within the camera’s field of vision should trigger an alarm. This is done by selecting and dragging a box on the computer screen. If there is movement within any of these pre-set zones, it will trigger the movement sensor in the camera, prompt it to start filming and send an alert via text message, email or phone to the farmer.

If this has been triggered, it’s up to the farmer to decide what he wants to do. He can log on from home or via someone else’s computer if he is away from home. He can even use an internet-enabled mobile phone to see live shots and track past movements.

“Depending on what the customer wants, we can store all the images in a secure data centre, housed 200ft underground in a disused nuclear bunker. This means that for any period of time, all images are retrievable should they need to be called upon in the future.”

A basic one-camera system costs about £1200. Storing images from each camera costs £5 a camera a month.