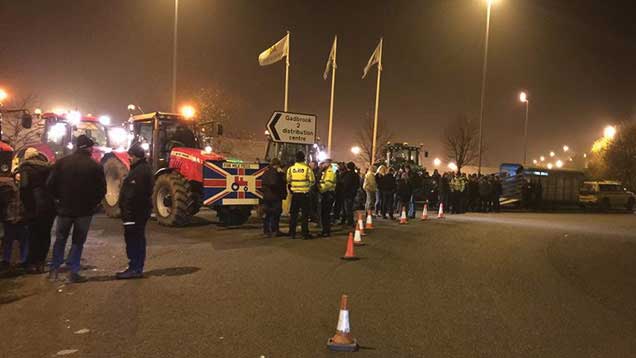 Up to 200 farmers used about a dozen tractors to prevent lorries from accessing the Morrisons’ depot in Middlewich, Cheshire.

Protest organisers Farmers For Action (FFA) said the blockades on Thursday (20 November) prevented lorries from getting in and out of the site.

By around midnight dozens of the retailer’s lorries were seen parked up on roads from Gadbrook, up to one mile from the depot. The protest ended at around 2am.

Meanwhile, a second demonstration at the Morrisons distribution centre in Bridgwater, Somerset, caused similar disruption to the milk delivery services.

Dairy farmer James Williams drove 126 miles from Hereford to take part in the protest at Middlewich.

He said: “We are protesting at Morrisons tonight, but they are not the only ones on our radar.

“We understand that Morrisons is putting severe pressure on processors to get the price of milk down.

“Until their chief executive Dalton Philips starts talking to us, this is the only course of action we can take.”

Dairy farmers have seen their milk prices slashed from on average 33-34p/litre in the spring to typically 26/litre from December, with some receiving as little as 21p/litre. Meanwhile the cost of production is above 30p/litre.

A global slump in dairy commodities, oversupply and the Russian trade ban on importing EU dairy products has been blamed for the milk price plunge.

But the FFA said British dairy farmers should be not be feeling the full impact of the global dairy slump as 85% of the milk they produce is used in this country.

FFA has accused Morrisons of devaluing milk and undermining the dairy sector, with many farmers losing money on every litre produced.

The retailer has also been accused of putting pressure on processors by re-tendering its liquid milk deal. Its current five-year contract is due to end in 2015.

“I’m looking at dairy farmers, grown men on the picketing line who are in tears,” he said.

“They cannot pay their bills. We had a few months earlier this year when things were looking better, but now all that money has gone. It has been spent on making up the shortfall.

“Some farmers who supply their milk to First Milk are on 21p/litre. You can only be efficient for so long and then it becomes a false economy.

“I haven’t spoken to one dairy farmer who has reinvested – all those plans have been put on hold. It’s going to be a difficult Christmas for dairy farmers, especially those with young families.”

A Morrisons spokesman strongly denied claims that the company had turned down the request to talk to FFA leaders.

“The FFA held their last protest at our site in Gadbrook Park, Cheshire on 30 October. We sent our response in a letter directly to their chairman, David Handley and FFA never responded to that letter.

“At last night’s protests the same letter we wrote was handed directly to FFA at both sites.

“The letter sets out our commitment to British dairy farmers and our position on milk prices and what we feel about the protests. It also urges FFA not to punish their fellow farmers with their protests.”

In the letter, seen by Farmers Weekly, Morrisons expresses its disappointment about the protests and blames “continuing movements in global commodity markets” for the present crisis.

It says: “We do not have a direct influence over the farmgate price paid to farmers. The commercial terms under which we pay our processors for bottled milk have not changed since the beginning of this year.

“There is no contractual link between the price we pay and the farm gate price, and any promotions on liquid milk have been paid for entirely by us and not passed on to the processor or farmer.”

FFA said it planned to step up its milk protests next week by targeting supermarkets with a leaflet drop, which will explain to the public the effect of milk price cuts.

These will be handed out in conjunction with striking wristbands in black and white.