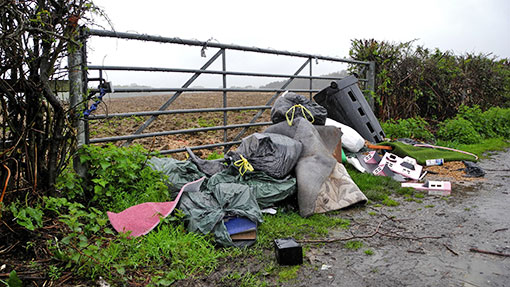 The number of reported incidents of fly tipping on agricultural land fell in 2013-14, according to government figures.

Defra has released statistics that show the number of fly-tipping incidents as a whole rose to more than 850,000 in the past 12 months.

Waste dumped by householders continues to be the most common form of fly-tipped rubbish.

In terms of quantity, most fly-tipped waste is dumped in either car or small van-sized loads.

Despite the fall in the figures, fly tipping remains a big challenge for farmers across the UK.

It is likely the figures underestimate the true extent of the problem for the agricultural community as it is the responsibility of the landowner to clear up any rubbish, so there is little incentive to report any incidents.

It emerged earlier this month that hundreds of tonnes of industrial waste disguised as silage bales had been discovered on a disused farm near Edinburgh Airport.

The haul of 600 bales was dumped in the farm steadings and sheds in July this year. The Scottish Environmental Protection Agency is appealing for witnesses.