Dorset Police are appealing for information after a dog was spotted attacking a sheep for 40 seconds and leaving it “motionless”.

A light brown dog chasing sheep near Worth Matravers, Swanage, was reported to police at around 1.10pm on Sunday, 14 January.

The dog, believed to be a cocker spaniel or similar breed, spent up to 40 seconds attacking a sheep, which was left motionless on the floor. 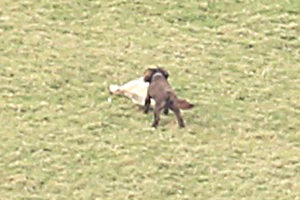 Police are seeking information about the owner of this dog

Its owner, described as a white man wearing a North Face body warmer and blue jeans, had another dog with him, which was dark brown.

After the attack, the dog returned to its owner, who put it on a lead and went back towards the sheep, but then walked away without checking on it. He was joined by four other people.

Police Constable Claire Dinsdale, of Dorset Police’s Rural Crime Team, said: “We are making enquiries into this incident. I am keen to speak to the owner of the dog involved. Anyone with information is asked to contact police.

“We would ask all dog owners to ensure their dog is on a lead whenever it is near livestock. At this time of year farmers may move livestock between fields so be extremely mindful to check.

“It is also important farmers report each incident to us. If members of the public have any information or concerns regarding dogs not under control near livestock, they too should contact police.

“Recent reports by the public have led to dog owners being identified, in particular capturing vehicle registrations.”

PC Dinsdale advises calling 999 if a crime is in progress. Other incidents can be reported online or by calling 101.

Anyone with information about the incident near Swanage is asked to contact Dorset Police through their website, via email 101@dorset.pnn.police.uk or by calling 101, quoting occurrence number 55180006836.

Lancashire Police are also seeking information about an unattended black Labrador that killed a sheep in the town of Carnforth.