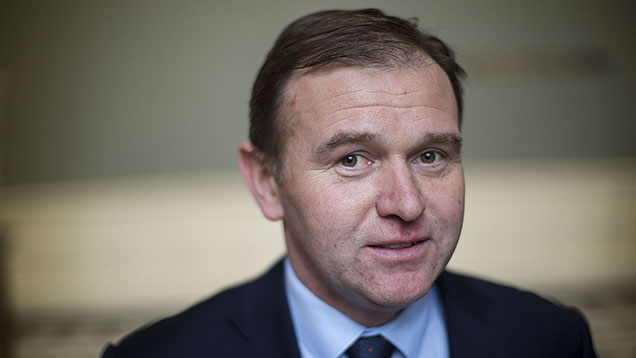 Farm minister George Eustice has urged farmers not to miss out on the first phase of a £141m scheme to help improve productivity.

The first tranche of the new Countryside Productivity scheme is open for applications through Defra’s Rural Payments Agency (RPA).

Up to £5m worth of government funding to help farmers access the best technology and boost innovation is available.

The money can be used to fund up to 40% of investments in specific types of farm equipment to help UK agriculture to become more productive and add profitability.

Grants will be offered in several areas, ranging from efficient lighting systems for livestock housing, slurry management and poultry litter-drying systems, to crop robotics and machinery for mechanical weed control.

Mr Eustice said competition for funding would be strong, so he advised farmers to get their applications in in good time before the window closes on 30 June.

“It is a competitive process and it is a limited tranche. We want to gauge interest in the items of suggested schemes we have listed [see ‘How to apply for funding’, below],” added the minister.

How to apply for funding

“If items are popular and farmers find that they are useful, we will continue to offer funding for these going forward.

“The applications will be assessed on their value for money and what they will deliver in terms of productivity. It will be done on a points-based system by an internal RPA team. The best applications will receive funding.”

Mr Eustice said he was keen to open the application process now before the general election to give farmers the chance to access funding this summer.

The Countryside Productivity scheme is part of the Rural Development Programme for England (RDPE) under Pillar 2 of the CAP.

The scheme will invest £141m over the course of the current CAP, which runs until 2020.

Mr Eustice said Defra would be working on opening further tranches later this year. This could involve larger amounts of funding to support groups of farmers who wish to work together on projects such as improving animal disease rates locally.

“The applications will be assessed on their value for money and what they will deliver in terms of productivity.”
George Eustice, farm minister

Speaking in broader terms, Mr Eustice said: “We have always said that agri-environment schemes will be different under the new CAP.

“Quite a lot of the measures that farmers were doing under ELS [entry-level stewardship] will now be a requirement under the new greening measures, which we opposed.

“Some of the ELS schemes only paid out about £3,000/year. In the new scheme, we will be asking farmers to do more active things, but probably pay more money.”

Country Land and Business Association (CLA) president Henry Robinson said: “Recognition is growing that future food security is a significant challenge for the UK – every hectare of agricultural land will need to produce more while landowners and farmers continue to protect and support the natural environment. Innovation has a critical part to play in meeting this challenge.

“The CLA has been calling for government to continue investment in the research that drives development of new technologies, and we are pleased that funding has been made available to help farmers to put these new technologies to good use.”