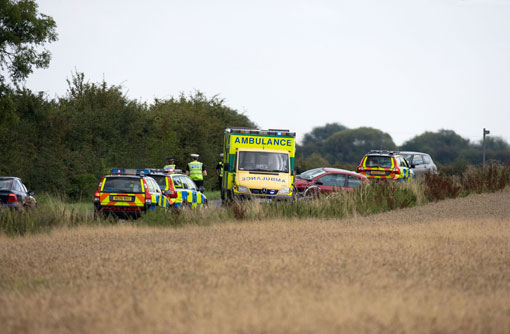 If you judge a driver solely on how much experience they’ve had behind the wheel, young farmers should be some of this country’s best. Just think about how much practice they’ve had.

Before they reach the grand old age of 17 – the legal age to drive a car on public roads – many rural teenagers have cut their teeth with years of on-farm driving experience. Many of them have been honing their tractor skills on private land since the age of 13.

They get behind the steering wheels of cars, quad bikes and tractors dozens of times every day to get the cows in for milking, check stock and carry out yard duties.

They can reverse a trailer into the tightest of corners and can control skids in the wettest of fields. The best of them have long been entrusted with farmworker responsibilities and are dab-hands at rolling, power harrowing and grain carting – often well before they can legally drive to the shops to pick up a pint of milk.

So why, with all this experience under their seatbelt, are they almost 40% more likely to have a serious collision on the road than their relatively inexperienced urban counterparts?

It’s a question that troubled the National Federation of Young Farmers (NFYFC) so much that they brought together dozens of leading names in road safety to join them in a national road safety campaign. The aim? In blunt terms – to keep their members alive.

“Going around all the clubs and counties, there is always a memorial trophy or competition in memory of a Young Farmer who has lost their life in a car accident,” says Milly Wastie, NFYFC chairman.

It’s something she knows about first-hand. When she was 17 and club chairman of Witney YFC in Oxfordshire, a friend and fellow young farmer was killed in a car accident.

“It was the first funeral I had ever attended and the fact it was for someone my own age was heartbreaking,” she says. The possibility that his death could have been avoided, perhaps by something as simple as training on how to tackle different driving conditions on rural roads, stuck with Milly and prompted her, all these years later, to instigate the Drive it Home campaign.

What the campaign isn’t about is scaremongering or discouraging young people from driving. When you live miles from your mates and even further from the nearest train station, cinema or shopping centre, passing your driving test is your single biggest ticket to independence – a passport out of the village.

Turning 17 is as much about getting behind the wheel, as turning 18 is about having your first legal drink in the pub.

What the campaign is about is getting to the heart of why, if young farmers are so good in the driving seat, the stats and stories are so shockingly bad.

“We’ve been saying for many years that the place where people die is national speed limit, single-carriageway roads,” says Peter Rodger, chief examiner and head of driving standards at the Advanced Institute of Motoring (IAM).

“The stereotypical young person’s car accident happens on a country lane, at night, with several people in the car, in the proximity of a bend.”

The finger of blame has also been pointed towards the driving test and its failure to prepare drivers for these kinds of conditions. According to IAM research, 82% of rural fatal and serious casualties occur on single-carriageway roads, but despite this fact, “the driving test still does not specifically address rural roads,” says Peter.

“In an ideal world, new drivers need to be taught how to drive on rural roads before they qualify. The speeds are higher, the need to assess bends and surface conditions is higher, and the consequences are often higher too.”

DRIVE WITH YOUR HEAD

However, while the roads undoubtedly play a part in the statistics, recent research by not-for-profit organisation Road Safety Analysis implies that the roads themselves are not always the overarching problem. Emma Gardner, a campaign manager for free driving education software Drive IQ, agrees.

“People pass their driving test with their hands and feet, but they crash with their minds,” she says.

“Young people all have the technical skills they need to drive – the same as 30-, 40- or 50-year-olds – but there has to be a reason why a disproportionately high number of young people die on the roads. That reason is attitude and behaviour.

“Nineteen out of 20 crashes are caused not by vehicle handling – how technically capable the person is – but by what mood they’re in. Whether they’re angry, sad, upset, showing off or in a rush.”

According to Emma, it all comes down to science. “There is research that shows that the frontal lobe of the brain isn’t fully developed until the age of 25, and that’s the bit responsible for danger anticipation, risk assessment, impulse and emotions.”

To understand how that research might translate in the real world, you just need to look at some of the comments on Farmers Weekly‘s Facebook page. “Country lanes are like a race track if you know the corners – dangerous but fun,” wrote one of our 21-year-old followers. “Drive her like ye stole her!” suggested another young follower.

Of course you can’t tar all young drivers with the same brush – let’s be honest, some are far better behind the wheel than drivers twice their age – but there’s no doubt that a reckless attitude to driving does exist. Once you combine this heightened sense of being “invincible” with higher road-speed limits, higher mileage and a whole host of hazards unique to rural roads, the accident numbers do start to make sense.

Over the next 12 months the NFYFC will be rolling out a programme of driver training to all 657 of its clubs in the UK, as part of their Drive it Home campaign.

sa”We want to leave a legacy that Young Farmers keep road safety on their club programmes every year and that each county has a Drive it Home champion that will lead the way in influencing others to drive safely.”

With almost half of its membership aged 16 and under, Young Farmers are perfectly placed to deliver these road-safety messages at precisely the right time. Before any more members become a memorial trophy.