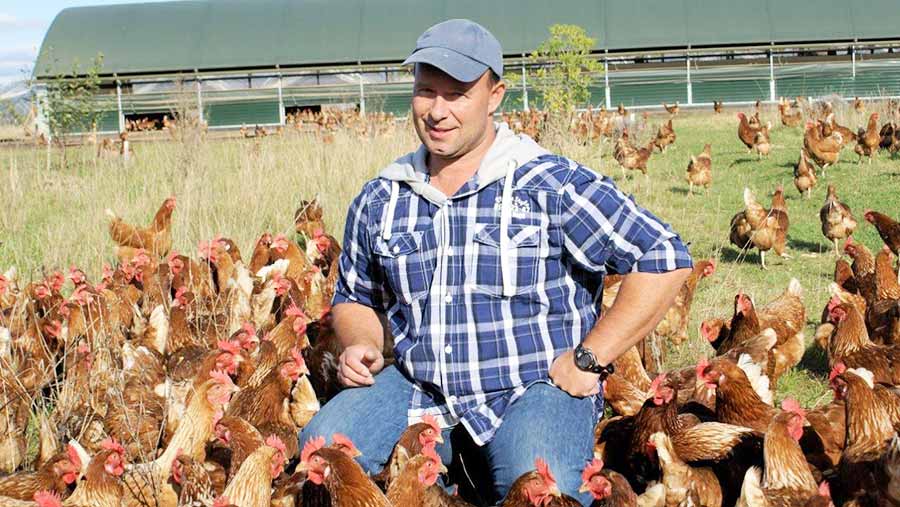 With less than two weeks to go to the end of the month, egg producer Andrew Cardy is expecting to have to downgrade his birds’ eggs from “free-range” to “barn”, with a potential loss of earnings.

Keeping 5,000 layers at Riverways Farm, Twyford, in Berkshire, he is one of several hundred producers who now finds himself in one of Defra’s planned Higher Risk Areas (HRAs) for avian influenza control.

The zonal approach is due to be introduced on 1 March, when the 12-week grace period for free-range birds to be housed without losing their premium status comes to an end.

While this policy is supposed to give producers in the HRAs an opportunity to move birds outside, few are expected to do so, because of the prohibitively high cost of netting off the entire range, as Defra says they would have to.

Instead, they are expected to continue to house their birds and take a hit on the eggs’ value.

Mr Cardy (pictured) has expressed his frustration with the Defra proposals and described his “shock” to discover he was in an HRA in the first place.

“I thought the higher-risk zones would be along the east coast and around areas that have already had outbreaks of avian influenza,” he told FWi.

“Instead, we ended up with sporadic ‘blobs’ across the whole country – and I then discovered we were in one of those blobs.

“When I looked at the detail, it just seemed so random. We farm close to the River Thames at Twyford (near Reading) and are deemed high risk. Yet Wargrave, also on the River Thames, is just a mile-and-a-half away and is low risk.

“I fully understand that disease is transmitted by wild birds, but why are they any more likely to land on the Thames at Twyford than they are at Wargrave?

“I know some farmers who are nowhere near any rivers or marshes, yet are in high-risk areas. It seems like a postcode lottery.”

Despite this, Mr Cardy says he would probably prefer to keep his birds indoors anyway, given the fact that there has just been another confirmed outbreak of H5N8 avian influenza in Suffolk.

“I am quite concerned that many producers in low-risk areas will be letting their birds out from 1 March. They will be in great danger as it is still peak migrating season. At least my birds are safe.”

Mr Cardy is also hopeful his own income will not suffer too much, despite his eggs being downgraded from 1 March.

“Normally we have 5,000 layers producing 4,400 eggs a day, though right now we have one shed empty and are waiting for 3,000 pullets to arrive next week.

“About half our eggs are sold through an honesty shop on the premises – called The Egg Box – which sells about 1,200 dozen a week and turns over £140,000 a year. We have more than 500 regular customers – and no staff.

“So yes, we will have to downgrade our eggs to barn eggs, but we will put up a poster in the shop saying that if customers want to pay 20p/dozen less, they can do so.

“In reality, I expect most will still want to pay the normal free-range price, so we are reasonably well protected from any market downturn for now.

“In six weeks’ time, however, the new pullets will hit full production. We would normally be selling the surplus eggs to a local packer, but he has already told us he won’t take anything that is not free-range.

“I just hope the supermarkets respond honourably [and hold prices]. But longer term, if we are going to have this every year during migrating season, we will have to revisit the codes and reassess the way we define free range.”