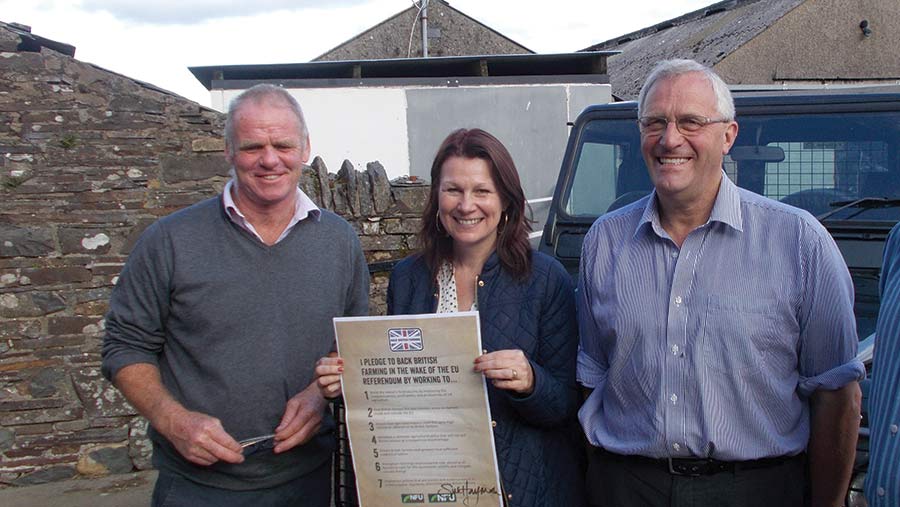 Britain’s farmers should be protected from substandard imports, while support should be targeted to deliver more for society, says Labour agriculture spokesperson Sue Hayman.

A Labour government would maintain farm payments until the end of the current CAP round in 2020, she suggests, before targeting funding towards smaller farms, innovation and environmental measures.

It would also fight for access to the single market while reinstating the Seasonal Agricultural Workers Scheme so UK farmers have access to a pool of temporary labour from overseas.

However, there would be a halt to badger culling as a means of combating bovine TB, which Ms Hayman says would be better tackled by focusing on vaccination programmes.

What does a good Brexit deal for British farmers look like?

A Labour government will reject leaving the EU with “no deal” as a viable option and negotiate transitional arrangements to avoid a cliff-edge for British farming.

We will replace the Conservatives’ Brexit White Paper with fresh negotiating priorities that emphasize the benefits of the single market and the customs union – which are essential for maintaining jobs and businesses in our food, farming and fishing sectors.

We will not allow Brexit to be used as an excuse to undercut our farmers and flood Britain’s food chain with cheap and inferior produce.

Is there a future for direct farm support?

Labour will maintain farm payments until the end of the current round and would look to rebalance future funds towards support for smaller farms, linking payments to productivity and innovation as well as to animal welfare and environmental stewardship.

How would you address the farm labour crisis after Brexit?

Migrant farm labour fell by 30% following the referendum last year. If a Conservative government continues to close its ears to this issue, the reality is that many producers may simply go under. Labour is not prepared to let that happen.

We have made clear in our manifesto that a Labour government will immediately guarantee existing rights for all EU nationals living in Britain, and will reinstate the Seasonal Agricultural Workers Scheme.

Bovine TB is a serious problem for cattle farmers, with 36,000 infected cattle slaughtered in Britain in 2015 at a cost to the taxpayer of about £100m. The response must be effective.

Badger culling is not effective. Professors Bourne and Woodroffe, who ran a £50m badger culling trial in 2007, concluded that badger culling could “make no meaningful contribution to cattle TB control in Britain”.

Labour has listened to the overwhelming expert advice and evidence on this matter and believe that the problem is more effectively tackled through vaccination programmes. We would end the cull of badgers, which probably contributes to the spread of TB.

How can British farmers compete after Brexit?

A Labour government would strongly promote British produce at home and abroad. This must continue to be synonymous with the highest quality.

We need a government willing to fight for single market access to allow farmers to trade their world-class produce without hefty tariffs. We believe the future of the British farming industry is intrinsically linked to tariff-free access to the single market.

Skills, innovation and technology will also be at the heart of Labour’s vision for the food and farming industry.

What is Labour’s view of key agrochemicals such as glyphosate and neonicotinoids – both threatened by Brussels?

Labour retains an open mind on glyphosate, but believes it is scientifically justified, and environmentally and economically prudent, to prohibit the use of neonicotinoids.

Some 84% of the crops grown for human consumption need bees and other insects to pollinate them to increase their yields and quality. Thirty-five bee species in the UK are now at risk. Between 1980 and 2010, 51% of pollinator species became less widespread.

We will work with farmers to develop alternative mechanisms for disease control.

GM crops – should farmers grow them?

We should keep an open mind to emerging agri-technologies as we address the future environmental and food security challenges.

Maintaining confidence in the quality of British produce is crucial to our economic success and so any proposed use of GM technology also needs to take into account the implications for trade – particularly with our European partner markets.

Is 61% self-sufficiency in food sufficient?

No. Our modern food systems are not working well. Food insecurity, imbalanced diets and food poverty are all serious issues in Britain in 2017.

Britain is a trading nation and we will continue to import some of our food. We need to look again at the air miles involved in overseas food production and processing, the effect of our dependency on farmers in developing countries and the risk of shortages arising from a food business that leaves us too limited and specialised, without self-sufficiency.

Do supermarkets have too much power over farmers?

Yes. The dominant role of large retailers is a part of the problem in our food system. That is why Labour has committed in our manifesto to extend the powers and remit of the groceries code adjudicator (GCA).

We need a tough supermarket watchdog to ensure the big supermarkets don’t exploit their farmers and producers, and don’t distort the market in favour of unhealthy but profitable diets.

How can we best help the next generation into farming?

British farming needs a clear, optimistic vision for the future. We must ensure the next generation of farmers and agricultural workers come forward. This can only be done by investing in education and training that is both accessible and affordable.

Our industrial strategy will support businesses to create new, high-skilled, high-paid and secure work across the country. Farmers are a part of our vision, for the many, not the few.