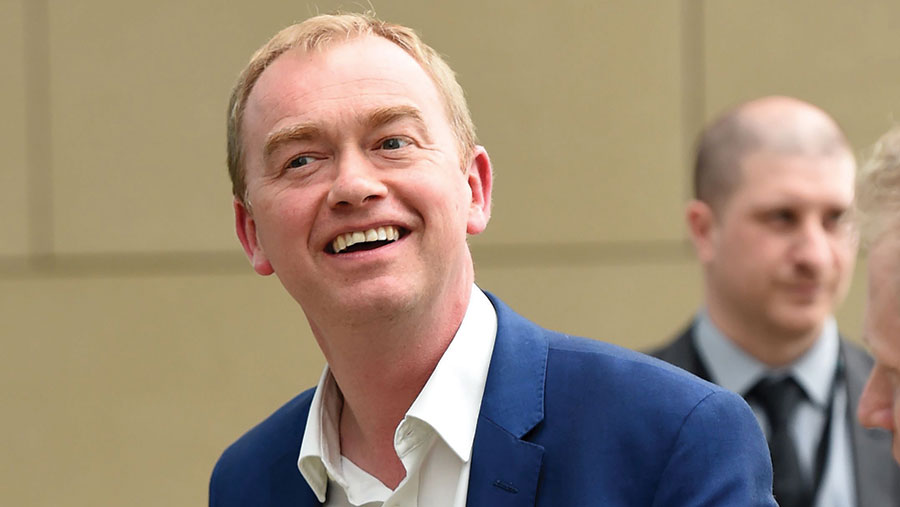 Maintaining full access to the single market after Brexit and developing a support system that benefits family farmers are two of the priorities for the Liberal Democrats in the run-up to the general election.

In an exclusive interview with Farmers Weekly, party leader Tim Farron has also stressed the need for a stronger Groceries Code Adjudicator in order to protect farm incomes, and expressed a willingness to help new entrants through new ownership structures and longer tenancies.

What does a good Brexit deal look like for farming?

We all know that 75% of all British farm exports end up in the single market and tariffs on British agricultural exports would hugely impact on farm incomes.

It will also put farmers in a weakened position when it comes to trying to get a good price for their produce.

Put bluntly, your best line of defence against a supermarket offering you peanuts is the ability to say that you can sell your produce overseas instead.

If you can’t, then you really are at the mercy of the supermarkets. So, the best Brexit deal for farmers will be one that keeps them in the single market.

The other thing is the money. At the moment we only have a guarantee until 2019 for initial funding. We would extend it well beyond that.

What is the future of direct support for farmers post Brexit?

The fact is that British farmers have always got a better deal from Europe than the one that the British government asked for. Past governments have an habitual unease about directly supporting farmers, despite the obvious need to do so.

I represent an area where direct payments are basically a lifeline. We need to make sure that we don’t just end up with all Pillar 2 (rural development payments), without a Pillar 1 (direct payments).

Unlike the Conservatives, the Liberal Democrats understand that not all farmers run wealthy estates. Most are either tenants or working hard to make a living as sole traders.

The loss of direct payments could be absolutely fatal and we will fight to keep them.

In terms of foreign labour, where would you strike the balance between what British society wants and what farmers need?

Well, you start off by not doing what Theresa May has just done – coming up with another ludicrously low, politically motivated immigration target.

You start off by working out an immigration policy that is good for Britain – and that includes being good for agriculture. You don’t give yourself an artificial cap that then undermines the ability of farmers to farm.

On bovine TB, do we need more or less badger culling?

Would the Liberal Democrats allow GM crops to be grown in the UK post Brexit?

I am open-minded about GM and think there are opportunities that we should take, especially if it contributes to efficiently feeding people.

Given the size of the global population and challenges to the availability of farmland due to climate change, again we need to take a science-based approach.

How do you approach the potential bans on glyphosate and neonicotinoids?

Our view is that glyphosate and neonicotinoids should probably both be suspended until it has been proven that they don’t cause harm. Ultimately, we’ve got to go with the research and make sure there are alternatives.

We’re never likely to be 100% self-sufficient, but our capacity to feed ourselves as a country has fallen by about 25% over the past 20 years.

My sense is that we should have a food production strategy that massively increases the proportion of home-grown food that British people eat.

At the same time, we should be in a single market that means we are able to trade without ridiculous cost. I think the balance is too far in the direction of importing just now.

What would the Lib Dems do about this?

We need research and development, and we need aid to help farm businesses become more efficient, but without them having to go down the route of excessive industrialisation.

Family farming is a critical part of our mix and we should be protecting them. So yes, research and development and business support, but in the end you need a market that is fair.

How would you achieve a fair market?

We would massively beef up the Groceries Code Adjudicator so that it’s got the teeth to be able to do what we wanted all along – that is to investigate individual and third-party complaints, and have sufficient penalties so that those who abuse their market power are punished effectively.

How would you help the next generation into farming?

That is critical. We’re looking at new ways of doing these things through different forms of ownership, longer tenancies, share farming and community ownership.

One of the projects that we rolled out in the Lake District was to allow affordable housing developments on the farm, essentially for the next generation to live in and work on site.

All these things are all really important – but so too is direct grant support to treat young farmers as priority.