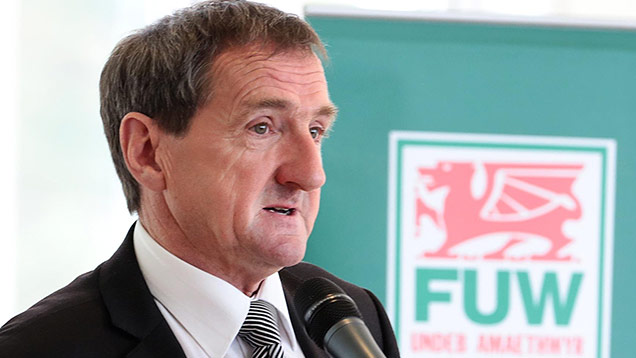 Bala beef and sheep farmer Emyr Jones has announced he is to stand down as president of the Farmers Union of Wales (FUW) after four years in the role.

Mr Jones revealed his decision at the union’s annual general meeting in Aberystwyth on Monday (15 June).

“Following the major reorganisation during the past year of the management of both the FUW and FUW Insurance, I believe we are now an organisation that can look forward with confidence to serving the Welsh agricultural industry for another 60 years,” he said.

“Therefore, after serving as your leader for the past four years and as deputy president before that for eight years, I think it is time that I took a back seat and allowed the union to be led by a new face who can deal with the challenges that continue to confront the industry.”

During his keynote speech to the AGM, Mr Jones said Welsh farmers would rise to the new challenges they faced, but could only do so with the support of a focused rural development programme (RDP) and in the absence of unnecessary restrictions.

“An appropriately structured RDP has the ability to raise awareness of the challenges and opportunities facing the industry over the coming years and decades, and above all else raise hopes.

“Such hope is desperately needed out there in the farming industry, at a time when farm incomes have crashed, farmgate prices have plummeted, and those factors influencing the euro-sterling exchange rate show little hope of improving in the near future – not to mention worries over our departure from the EU.”

Mr Jones said that while some factors were beyond government control, regulation was one area where it could make a difference.

He warned that the Welsh government’s appetite for legislation could not only hinder the achievement of key objectives agreed upon by government and farming organisations, but also bring the principle of devolved government into disrepute.

“Overzealous legislation makes for bad governance, and strapped-for-cash businesses and authorities across Wales wait with bated breath, hoping that their worst fears are not realised when it comes to implementing the raft of legislation that is about to hit us here in Wales,” he said.

Mr Jones is married with three children. A Welsh speaker, he was born and brought up on the family farm Rhiwaedog, Rhosygwaliau, near Bala.

The farm extends to 145ha, with a further 120ha of rented land, and carries a herd of 60 pedigree Welsh Black suckler cows and 1,700 breeding sheep.

He is a prominent member of many organisations, including the Welsh Mountain Sheep Society, Welsh Black Cattle Society, and is a director of Meirionnydd County Show.