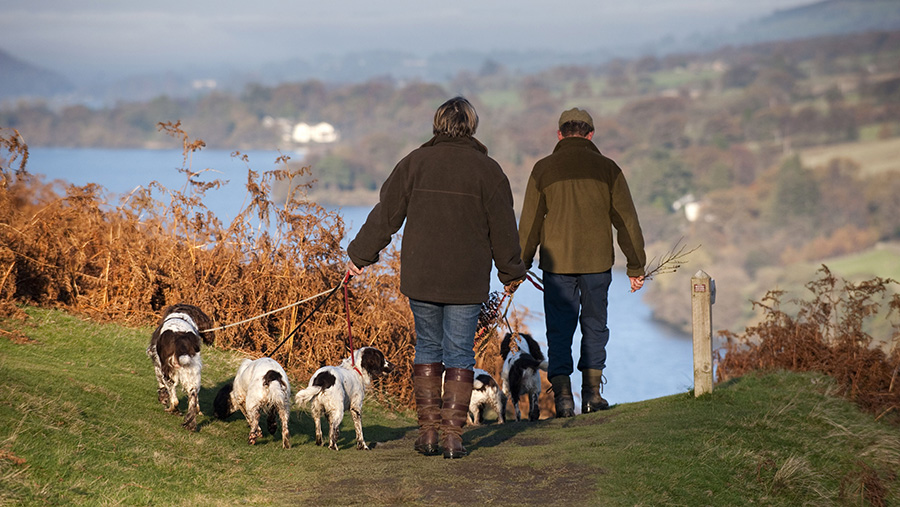 Dog walkers are being asked to keep their pets on leads at all times in the countryside to help protect young animals and ground-nesting birds.

Farmers and land managers are working hard to try to reverse a decline in ground-nesting bird species through practical measures in agri-environment schemes, such as fallow plots, grass margins and supplementary winter feeding.

Spring and early summer are critical times for breeding birds, and theirs nests need to be undisturbed so they can lay plenty of eggs and raise as many chicks as possible.

However, farmers believe their good work could be undone if roaming dogs are allowed to disturb wildlife during the nesting season. This is in addition to ongoing problems of livestock attacks caused by loose dogs, especially during the lambing and calving season.

Jake Freestone, who manages Overbury Farms, an arable and sheep farm on the slopes of Bredon Hill, in Overbury, Gloucestershire, took to his Twitter account over the weekend to urge dog walkers to behave responsibly in the countryside.

Pickup point for today ‘ if your dog runs over a #skylark nest the chances are-it will be abandoned’ keep your dog on a lead whilst walking in the countryside. It’s not difficult……..is it?

He tweeted: “If your dog runs over a skylark nest, the chances are it will be abandoned. Keep your dog on a lead whilst walking in the countryside. It’s not difficult… is it?”

NFU deputy president Stuart Roberts said it was good to see that more people were enjoying the mental health benefits of walking in the countryside, especially during the lockdown.

But Mr Roberts said the Countryside Code was clear that dogs must be kept on a lead at all times near livestock – and on a short lead in most areas of open country and common land, known as access land, between 1 March and 31 July, when birds are nesting.

“There has been a growing problem of people straying into environmental strips, which from the public’s view looks like the edge of a field, whereas farmers know it is a working area where we are actively encouraging biodiversity,” he added.

“My message to dog walkers is clear: please stick to the footpaths, don’t go into areas where it says ‘this is a wildlife margin’, and keep your dogs on leads.”

Yorkshire Wildlife Trust asked dog walkers to get behind the Countryside Code and “respect, protect and enjoy” the outdoors when out walking in “God’s country”.

It said: “The celebrated song of the skylark or burbling call of curlew are evocative and welcome spring sounds, as we start to explore our wonderful countryside again.

“Birds like these – whose numbers are in worrying decline – are currently making their fragile nests on the ground, tucked away safely in long grass.

“An exuberant or inquisitive pooch, wandering or bounding through grass or heather, could easily disturb wildlife and scare adult birds off nests or trample eggs. And the vulnerable chicks can quickly perish if they are left alone for too long.”

Defra has issued four steps of advice for dog walkers: stick to the main paths, keep dogs on a short lead, watch out for nests and treat the outdoors with respect.