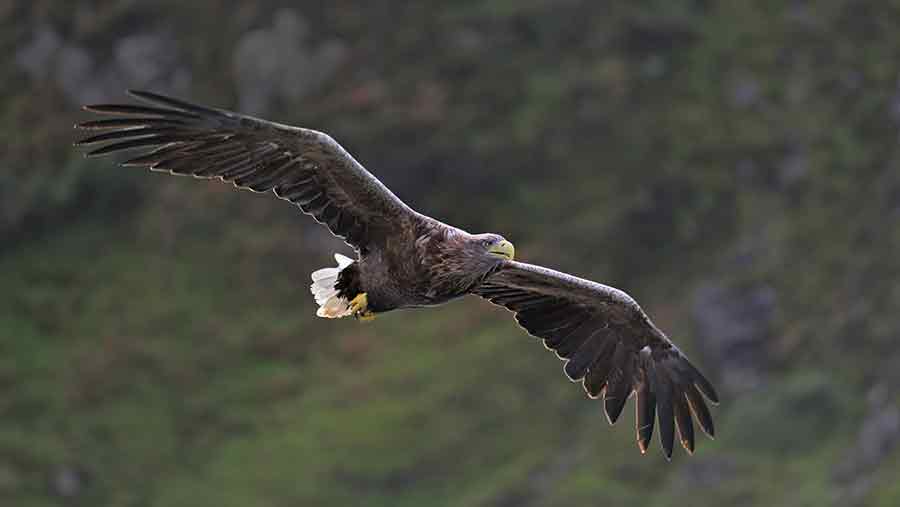 A survey is under way to capture farmers’ views on the release of sea eagles on the Isle of Wight amid concerns the birds could predate lambs.

The National Sheep Association (NSA), which has warned against the introduction of the birds, launched the farmer-facing survey on Monday 19 August.

Natural England has granted a licence to the Roy Dennis Foundation and Forestry England to release up to 60 white-tailed sea eagles on the Isle of Wight over the next five years.

The release began in mid-August, with six young birds sourced from Scotland’s populations.

The government says reintroducing the eagles could help the island economy after a similar scheme on the Isle of Mull in Scotland boosted its local economy by up to £5m/year.

Their last-known breeding place in the region was recorded at Culver Cliff on the Isle of Wight in 1780. But human activity and persecution led to the birds being wiped out.

But the NSA formally opposed the release on the grounds that the widely reported decline in biodiversity and species abundance will result in the birds being driven to predate healthy sheep and lambs and other non-typical food sources.

However, now the licence has been granted, the NSA has agreed to work with the project team and Natural England to help them mitigate problems and to try to identify harmonious regulatory and practical approaches.

“While this release may currently be considered a local event, if successful, it could result in white-tailed sea eagles being widespread across the UK, with no real discussion or engagement with the farming community,” said NSA chief executive Phil Stocker.

“The birds are already present and growing in number in Scotland following a staged release over the past 40 years, and it is clear that current policy and regulatory approaches are not leading to harmonious relationships.”

While the white-tailed sea eagle release and the majority of the consultation process is being conducted on the Isle of Wight, it is accepted by those involved in the release that the birds are unlikely to stay there.

If the release succeeds, the birds could spread across significant areas of England and even Wales, the NSA says.

Mr Stocker adds: “Although the licence has already been granted and the release has gone ahead, the very localised consultation and engagement process being done on the island and surrounding areas is not sufficient when the spread of these birds will go much further.”

You can complete the NSA survey online. It will be open until 9 September.