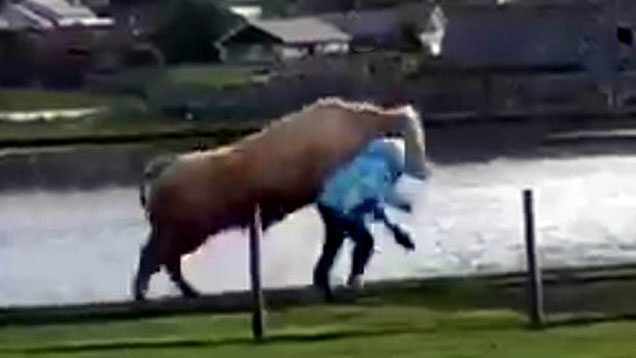 A raging bull charged a woman jogger and injured two people when it went on a three-hour rampage through an island town.

The two-year-old bull caused chaos after it cut loose from a farmer’s field and wandered into Lerwick on Shetland.

It was caught on camera charging 72-year-old Mary Thomason, who was taken to hospital for treatment for minor injuries.

“It was a total shock, it was like crashing into a car,” Mrs Thomason told her local paper, The Shetland Times.

The pensioner, who had been out for an evening stroll, was badly winded and was “down on the ground for a wee while”.

“I was probably knocked out for seconds I would say, I dunna ken how long it was,” she added.

“I was just walking along and I was watching the footballers playing, thinking it was my grandson, and my other grandson Sonny.

“I was looking towards the park and when I turned to look ahead of myself this animal came right for me.”

A man in his 40s also required hospital treatment for minor injuries after he too was knocked over and trampled by the bull.

Student Holly King was out jogging when the bull chased her. She managed to escape unhurt but was left shaken by the incident.

Police said the bull was eventually captured at about 10.30pm on Tuesday (2 June) in Greenfield Place after a cow was used to calm it down.

The animal was placed in a trailer and taken back to the farm.

A Police Scotland spokesman said: “The bull was escorted to a walled garden, where officers were able to take control of it. A man in his 40s was charged and stood on. He was also taken to hospital.

“They brought in a cow to settle it down and it was taken back to its farm.”

Last month, a cow was shot dead by police marksmen in Northumbria after it escaped from a field in Wallsend.

Officers came in for criticism on social media for shooting the cow after some suggested its life could have been spared if a vet had administered a tranquiliser.

See also: Elizabeth Elder’s opinion on why a more laid-back approach could have saved Bessie the cow