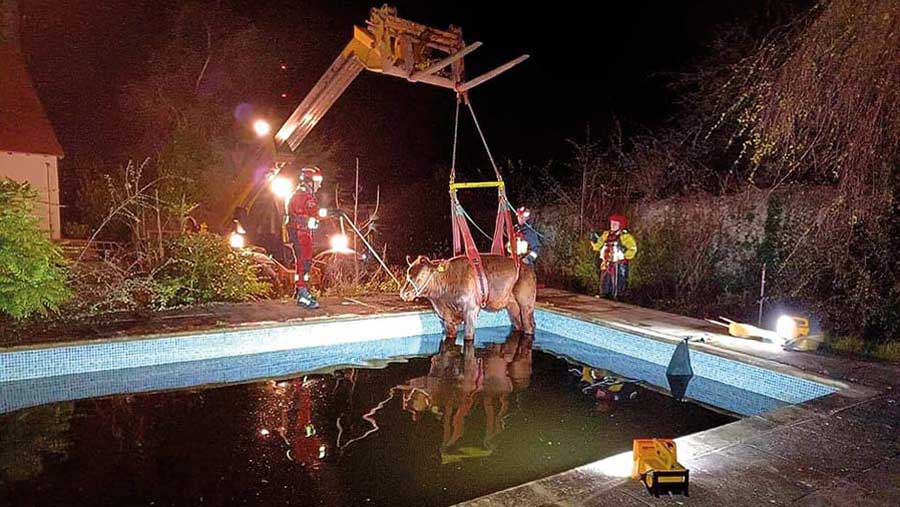 Firefighters in Devon have rescued a 600kg bullock from a swimming pool after it escaped from a nearby field.

Three crews from Devon and Somerset Fire and Rescue Service took almost four hours to free the bullock from the pool at a house near Paignton.

When firefighters arrived from Paignton, Torquay and Exmouth fire stations, the bullock was up to its neck in the murky water.

The pool was partially drained before a painstaking operation to pass a webbing harness underneath the bullock while it was still partially submerged. A telehandler was then used to hoist the animal clear of the water and it was swung on to dry land.

It was then moved to a waiting trailer after a veterinary examination, which revealed the animal to be very cold but well.

Rob Cude, group manager at Devon and Somerset fire service said: “The plan was to feed webbing strops underneath the bullock after pushing him into the corner of the pool.

“By the time we lifted him out the bullock had been in the pool for three to four hours and was very cold, with obviously numb legs. We held him in the harness for a few minutes until he could support himself again.”

Mr Cude added that the bullock had been calm in the water and was unfazed by the noisy water pump, which he swam towards to investigate.

The bullock is reported to be back in the owner’s field and has suffered no lasting effects.