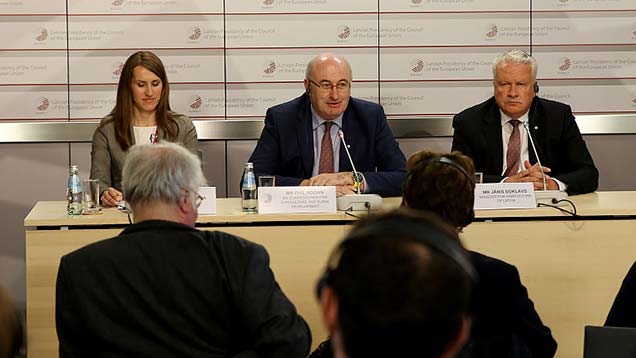 EU agriculture ministers are edging closer to agreeing a review of legislation of the organic sector, including a possible threshold for pesticides in organic products.

The Latvian presidency of the European Union said significant progress had been made and they were confident that an agreement could be made on 16 June.

Organic farming, which represents about 5.5% of farming in the EU and 3% in the UK, was the key theme for more than 100 farming and ministers and leaders meeting in Riga, Latvia, this week.

An informal meeting of the Council of Ministers for Agriculture was held on 1-2 June in Riga, where Latvian side, representing the presidency of the EU Council, initiated discussions on the situation in organic agriculture and its development in the EU.

Ministers discussed the possibility of introducing a threshold for pesticides in organic products, the simplification of the common agricultural policy and animal and plant health regulation among other issues relating to Latvia’s six-month rotating presidency of the European Union.

Therefore, it believes it is necessary to harmonise legislation to ensure equal competition conditions and to reduce fraud risks.

Speaking at a press briefing following the informal meeting, EU farm commissioner Phil Hogan said there were “grounds for optimism” that an agreement could be reached on 16 June and then become legislation later this year.

“The principle of consumer trust in the organic sector, harmonisation and standardisation of the areas, a level-playing pitch vis-à-vis imports from foreign countries – all of these principles are still in place as far as the European Commission is concerned.

“16 June is just one step. Then we will hopefully be in a position to engage with the European Parliament when they have concluded their work, in September.”

Latvia has made organic agriculture one of its priorities during its presidency. About 11% of the country’s farmland is devoted to organic farming, which is the fifth highest proportion in the EU.

Latvian agriculture minister Janis Duklavs said: “Organic farming is one of the priorities of the Latvian presidency

“We have invested a lot of effort into organic farming regulation. I hope to arrive at a practical agreement at the end of this presidency.”

Copa president Albert Jan Maat said: “The new rules need in particular to allow the 250,000 organic farmers to earn a living from their activity and also to attract new farmers to convert into organic farming, whilst ensuring consumer confidence.

“We need evolution and not revolution of the rules.”