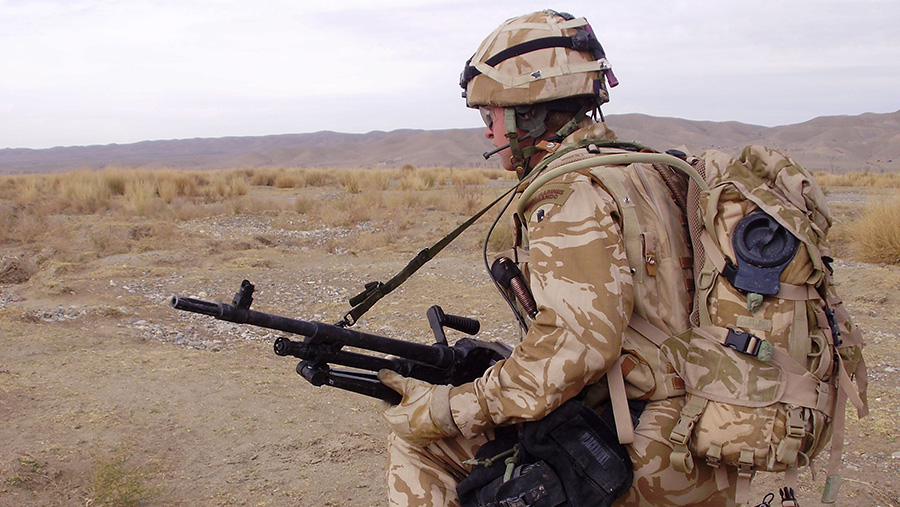 Military veterans are being encouraged to work on farms in a bid to help solve the shortage of skilled workers in agriculture.

A project being trialled in East Anglia is matching military leavers with future employers – with a special focus on agriculture.

Recent figures suggest agriculture needs to find at least 6,000 new entrants a year, yet job vacancies are proving increasingly hard to fill because the sector is frequently perceived as unattractive.

Military veterans are seen as an untapped pool of expertise for farmers looking for capable staff who are willing to work on their own initiative outdoors and capable of operating large machines and equipment.

“Recruiting the right young people into farming and related industries is vital for the future of the rural economy,” she says.

Former servicemen and women are the “ideal workforce to help grow the region’s farming and land-based businesses,” she adds.

Many veterans find it difficult to secure gainful employment. But Mrs Currie says: “We have here a group of people who are already equipped with many of the skills we are looking for in East Anglia’s modern, progressive farming industry.”

In the east of England, only a quarter of former veterans feel their employer fully recognises their skills and experience. But if successful, the initiative could be rolled out to other parts of the UK.

Although some people question estimates that agriculture needs 60,000 new entrants over the next decade, there is no doubt recruitment is a problem. But agriculture and the forces have much in common, says Mrs Currie.

“Most people don’t realise the jobs there are in agriculture. If you told the average person leaving the forces, they would probably have no idea, yet both jobs are very compatible. Both work with big bits of kit and computer technology and the skills are transferable.

“Former servicemen and women are reliable, used to operating large vehicles, have good attention to detail, are disciplined, enjoy working outdoors – and they are fit too.”

Mrs Currie says she was disappointed to find that the MoD’s careers transition unit at nearby Colchester Barracks had no information for service leavers on careers in farming and the food industries despite the wide range of good opportunities.

Her enthusiasm for the Vets scheme was fuelled by seeing her own nephew struggle to adapt to civilian life after five years in the Parachute Regiment. “Farming can offer a buffer that many other industries can’t,” she says.

Agriculture also offers a comradeship that is similar to life in the forces, Mrs Currie adds.

“In the military, you are expected to work as a team and back each other up. Farming is similar. But in a civilian office environment there is often none of that – it just isn’t always the ethos.”

Other than growing up in rural Suffolk, William Brew-Butler had no connection with agriculture – but the early signs were there. “When Bury St Edmunds had a cattle market, that was my place to go,” he says. “When I was little, Mum would take me up there to watch the pigs being sold.”

Mr Brew-Butler spent five years as a gunner in the RAF Regiment – the ground fighting force of the RAF. His time included a tour of Afghanistan in 2010 before he left a year later, diagnosed with post-traumatic stress disorder and hearing loss.

“When I left the forces, animals were a big part of helping with my post-traumatic stress disorder. I started keeping a few sheep and cattle on a smallholding – it was my therapy. An animal will never judge you in the same way that another human would.”

He is now an assistant farm manager on an outdoor pig unit for WH Wallace & Son at Hall Farm, Coney Weston, near Bury St Edmunds. The farm is an outdoor breeding unit of 900 sows producing about 1,200 piglets every three weeks.

“Farming is a world apart from the military but I’ve still got my uniform hanging in the wardrobe,” he says.

“I’ve got bags of kit in the spare room too. It’s all there – untouched since I left. I know I don’t need it but I am ready to go – even though I’m never going to use it again.”

Mr Brew-Butler says he received little careers help after leaving the military. “I got no help writing my CV – my dad did it for me.

“To be honest, as soon as I left, they didn’t really want to know anything anymore. Something like the Vets project would have been really useful.”

He believes farming could offer opportunities for other former servicemen and women too.

“People in the forces – most of us didn’t really do well at school and many of us aren’t really academic. I don’t read or anything like that and a lot of the lads wouldn’t know where to start when it came to writing a CV, let alone anything else.

“Most of the 30 or so lads I passed out with have left now. A lot of them have gone into office jobs but I like the outdoors and knew I wanted to go into farming so it was something I pursued – but most people don’t consider it because it doesn’t even occur to them.”

After finding work as a stockman on a farm for a year, the 26-year-old successfully applied for his current job, which he has been doing since last May.

He is now helping to promote the Vets scheme to encourage other former members of the armed forces to carve a new career in agriculture.

Mr Brew-Butler appears to have found his niche in farming. “I see this as a long-term career move,” he says.

“I’d like to manage my own pig unit. I’m never happy until I get to the top of what I am doing and I enjoy pushing myself hard.”

Herefordshire farmer Tom Powell left the forces eight years ago to return to the family farm. Former servicemen and women are ideally suited to careers in agriculture, he believes.

“In order to serve in the armed forces, you need a high level of drive, determination and resilience,” says Mr Powell, who served for six years as an officer in the Royal Artillery, which included a tour of Iraq in 2006.

“The armed forces develop your initiative, problem-solving and communication skills. Those qualities and other attributes that crossover well are reliability, the hard-working nature you need for both industries, and the ability to work comfortably outdoors and operating all sorts of light and heavy machinery.”

The family farm at Yazor is mainly combinable crops, potatoes and cider apples. “It was always my intention to return home but I wanted to develop my core skills elsewhere,” says Mr Powell.

“I found that those skills were entirely transferable when it came to farming.”

About the Vets project

The Veterans Employment Transition Support initiative in East Anglia is the first regional hub for a national partnership project providing support, registration, mentoring, and other employment services for former members of the armed forces.

Research with nearly 800 former veterans found many employers do not value military experience as highly as they might.

This means many businesses are missing out on a wealth of talent, says Nicola Currie (pictured), apprenticeships ambassador for Easton & Otley College.

Vets East is matching service leavers with the region’s businesses – in particular, small and medium-sized enterprises. Mrs Currie is leading the initiative for farming and the land-based industries, encouraging local farmers to consider veterans as potential employees.

“We have here a group of people who are already equipped with many of the skills we are looking for in East Anglia’s modern progressive farming industry.

“Couple this with the right additional training and we have access to an ideal workforce to help grow the region’s farming and land-based businesses.”

Farmers and employers are encouraged to sign up on the Vets East website where they can advertise job vacancies or offer mentoring and work placements.