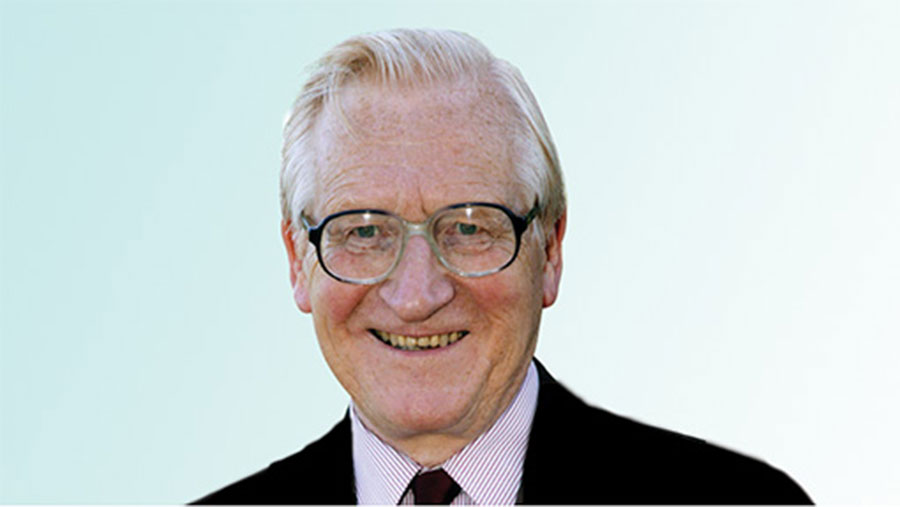 Professor Nix, a fellow of Wye College, University of London, died on 14 March.

The first edition of his pocketbook was published in 1966 – and has stood the test of time ever since, cementing his reputation as a pioneer of farm business benchmarking.

See also: Why you should use bench-marking on your farm

Now in its 48th edition, and known as the John Nix Farm Management Pocketbook, it remains a vital management tool for many farmers, consultants, academics and students.

During a lengthy career, Professor Nix was the recipient of many awards and accolades in recognition of his contribution to agricultural economics and farm management.

Born in 1927, the young John Nix was adopted by foster parents as a child and brought up on a council estate in south-east London.

He was the only child on the estate to pass the 11-plus at that time and showed his “genius for numbers” at an early age.

War interrupted his education but he won scholarships to attend London and Exeter universities to study economics.

He opted for Exeter and the then University College of the South West. The family had very little money, so he would cycle back home to London, stopping en-route in barns.

When Prof Nix left Exeter, he secured a three-year graduate position as an instructor lieutenant with the Royal Navy from 1948-51.

He had hoped to see the world – but never left the dry dock on HMS Ganges in Harwich.

During this time, he had stayed in touch with his university director of studies, who tipped him off about a job in the farm economics department of Cambridge University’s School of Agriculture.

It was at Cambridge he turned his talent for numbers into a practical management tool.

He gathered information from farmers across East Anglia, realising that farming techniques, in his words, “were outstripping the quality and quantity of data available”.

He then moved to Wye College in 1961 as farm management liaison officer and lecturer.

He flourished in the smaller academic environment, where he founded and published the first edition of the Pocketbook in 1966.

He was given his personal chair, the first in farm business management in the UK, in 1982, and in 1995 was made a fellow of Wye College.

In 2007, he was made an Honorary Fellow of the Royal Agricultural Society of England and four years later received the 2011 Agricultural Economics Society Award for Excellence.

In making Professor Nix the recipient of its lifetime achievement award, Farmers Weekly described him as “the pioneer of benchmarking in British agriculture”.

It added: “He has helped to empower farmers, and those who advise them, to manage their businesses better and more profitably.”

She added: “He was loved and deeply respected by generations of students, by fellow academics and throughout the agricultural industry, to which he contributed so much during his long and illustrious career.”

A funeral service will be held at 2.30pm on Friday 20 April, at the Church of St Gregory and St Martin, Wye, Kent, with a memorial service due to take place in London at a later date.