Countryside criminals are becoming more brazen and farmers are having to go to extra lengths to ramp up security and protect their livelihoods.

Some farmers are turning their farmyards into fortresses to ward off criminals and prevent tractors, quad bikes, power tools and livestock from being stolen.

While offenders continue to target traditional “hits” such as Land Rovers and older tractors, rural crime is now a serious and sophisticated business involving organised gangs operating across borders.

We look at some of the latest security measures and legislation, including advice on firearms matters, fertiliser security, fitting Datatag/Cesar security marking systems on machinery and the extensive equipment now available to help protect your farm and property.

When police find farm machinery they think is stolen but it has been stripped of its identifying marks, they often turn to equipment and security expert Nick Mayell.

Mr Mayell, Datatag’s police liaison and training officer, has more than 30 years of experience in tracing and identifying stolen plant and agricultural machinery.

Many years ago, nearly all machinery stolen from farms would be found in the same county, if recovered.

But these days, he says, roughly £1m of kit is being stolen from UK farms every week, and it is often destined for abroad. 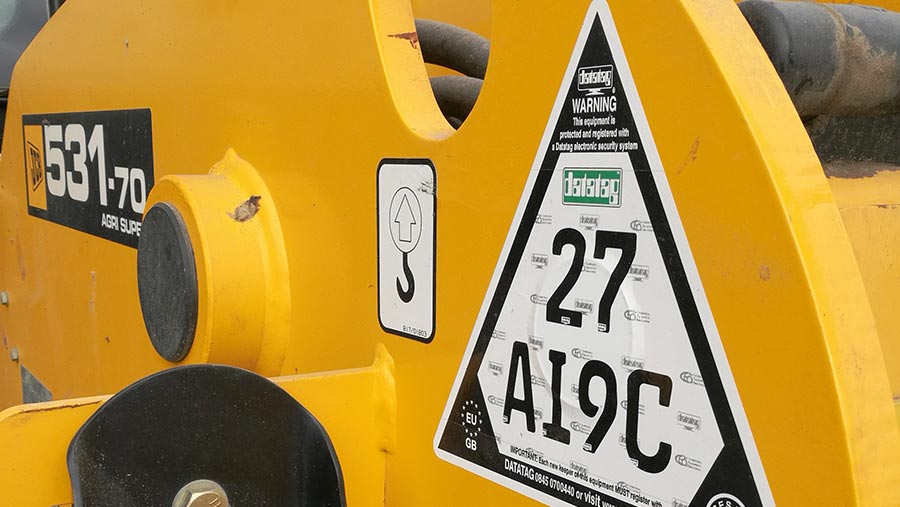 Mr Mayell says about 60% of farm machinery theft is carried out by organised criminal gangs, who exchange stolen kit for cash, drugs and weapons.

Gangs are shipping tractors out of the UK to countries across Europe and further afield, including Africa and Australia.

Mr Mayell recalled being asked by police to identify a stolen JCB digger that had chassis, engine, pump, gearbox and axle numbers all either defaced, completely ground out or missing altogether.

The digger had its company branding missing and was showing only 88 hours on the clock. But because it was fitted with Datatag and Cesar’s unique layered security markings, with microdots scattered around the vehicle, he was able to identify it “within five minutes” and reunite it with the owner.

Mr Mayell urges all farmers to report tractor, quad and other machinery thefts to police and provide as much detail as possible, including make and model, registration plate, serial number, engine number and Cesar number. 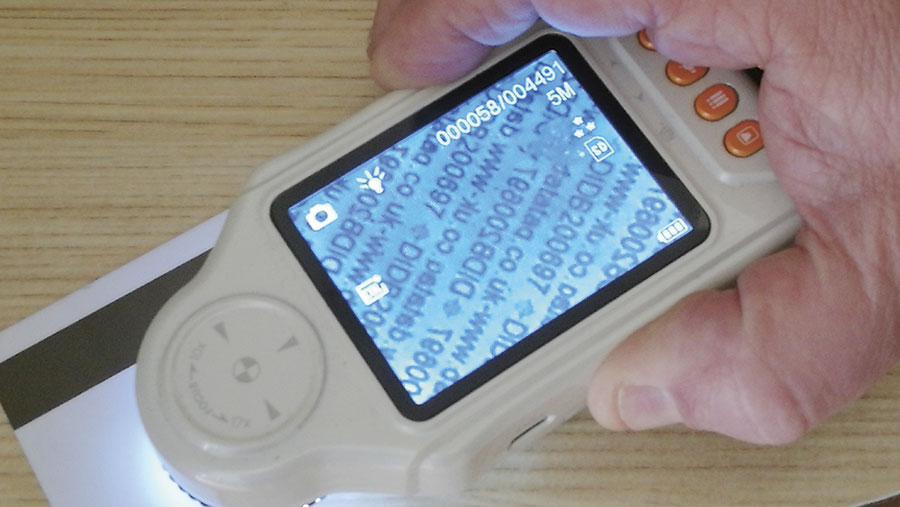 He says it is vital that farmers use security marking technologies within the Datatag and Cesar schemes to enable the true identity of stolen machinery to be established.

“If you make sure everything you have is ‘Cesared’, it will go a long way to recovering your stolen piece of kit,” he adds.

Leading insurance companies can provide premium discounts for owners and contractors of up to 20% when registered with Cesar.

Security of fertiliser storage on farms

Farmers who fail to report either missing or stolen batches of ammonium nitrate (AN) fertiliser from their farms could be prosecuted under anti-terrorism laws.

“If your AN fertiliser goes missing, you have got to report it,” says Nigel Horton, Hampshire Constabulary’s counter-terrorism security adviser.

“If you fail to tell the authorities, you could end up with three months in jail, or a very large fine.”

Mr Horton says anti-terror police are trying to monitor about 3,000 terror suspects with “very limited” resources. So far, about 50 plots have been foiled.

Although terrorists appear to have “gone away”, it won’t be long before they return, and every farmer has a duty to ensure their AN fertiliser doesn’t get into the wrong hands.

Mr Horton showed farmers videos of horrific terror attacks around the world carried out using fertiliser-based explosives, including the Oklahoma bombing in 1995 and the IRA’s bombing of the Manchester Arndale Centre in 1996.

“You guys [farmers] out there hold the most AN. If it is stolen or goes missing, report it. We will check it out,” he told farmers.

Farmers and landowners also have a duty to report suspicious characters who turn up on farms and ask to buy AN fertiliser.

Murdered MP Jo Cox was shot with a gun stolen from the back of a pest control company vehicle in Thirsk, North Yorkshire.

There are 1.9m lawfully held firearms in the UK, and 28,000 firearms certificate holders in Hampshire.

Mr Hill said there was increasing concern about firearms and shotgun holders not ensuring the security of their weapons and ammunition.

The Firearms Rules 1998 require all firearm and shotgun certificates to be produced with the statutory condition that firearms and ammunition “must at all times be stored securely so as to prevent, so far as is reasonably practicable, access by an unauthorised person”.

The most common thefts are from vehicles, with domestic burglary second.

Mr Hill said farmers whose guns are stolen or lost could face prosecution and revocation of their certificates, if they have not taken reasonable measures to secure them.

If your gun is lost or stolen, you must report this to the police immediately on 101, giving details of bore, make, model, serial number, etc. 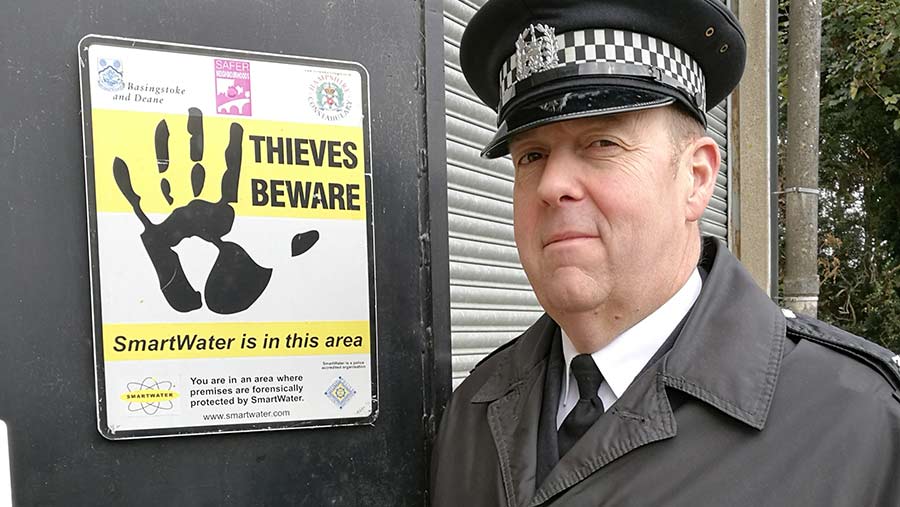 PC Andy Reid said: “We have seen a rise in reported criminal damage and associated rural crime in this area on farms and farmland.

“All the speakers are specialists within their own areas and I felt what they had to say would be of benefit to the farming community in this area.

“This has been a success and I will look to hold similar events in the future, as farmers and landowners need to be aware of products available to help protect their farm, equipment and livelihoods.”

Farmers who attended the crime prevention day told of the financial and emotional cost of rural crime.

Philip Talbot, a farm manager at a 405ha sheep and arable enterprise at Old Basing, near Basingstoke, said illegal hare coursing gangs were a constant menace.

Recalling one recent incident, Mr Talbot told how the estate’s gamekeeper spotted an unknown man walking across the field in the village of Cliddesden.

“As we came back into the village, we saw the dogs running across the field. The gamekeeper did not want to approach them as he was carrying a gun.”

Police were called and the illegal hare coursers fled. A chase ensued around the nearby villages of Mapledurwell and Greywell.

Mr Talbot said police apprehended the illegal hare coursers and found they had travelled from Oxford.

Another farmer, Alex Batten, from Crondall, near Farnham, Surrey, said he has invested heavily in secure boundaries. 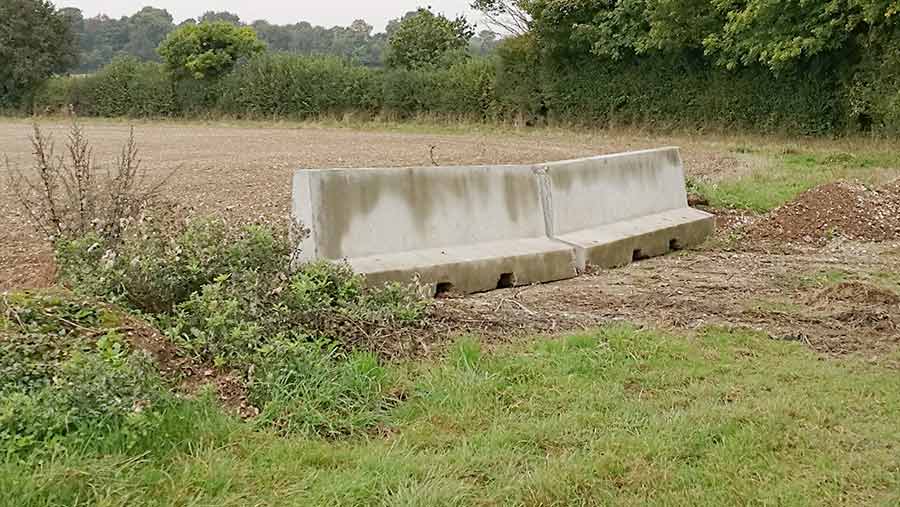 “We have now got reinforced concrete barriers, hedging and ditches around fields,” he explained. “Whether it’s people trespassing with a dog, or vehicles, we have done all we can – but it’s still challenging. We keep getting barriers broken.”