A frustrated farmer has closed his woodland to the public after the Forestry Commission withheld his grant money over a form-filling row.

Stephen Peck entered his farm into an English woodland creation scheme in the year 2000 to plant 100,000 trees into 32ha (80 acres) of pasture.

The 15-year Farm Woodland Premium Scheme entered its final year in 2015 and Mr Peck was expecting to receive his final grant payment of £9,000.

But when the last payment did not arrive, his wife Fiona telephoned the Forestry Commission to ask why.

The commission told her that the farm had failed to complete an important form posted in spring 2015, which had to be returned by 15 June 2015.

The failure to return the form by 15 June triggered an automatic penalty of 1% a day until 10 July, after which a 100% penalty was incurred.

The commission told the couple that Rural Payments Agency (RPA) staff made three follow-up telephone calls to chase the return of the form.

However, the couple said no one from the agency spoke to them directly and any that message was left with staff was not passed on.

No record of the forms 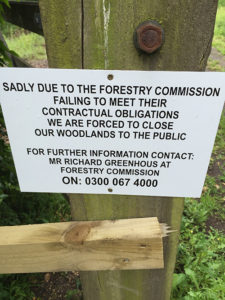 Mr and Mrs Peck, who run Eggington Dairy and Pecks Farm Shop, near Leighton Buzzard, in Bedfordshire, said the forms never arrived at their family farm.

But when Mrs Peck offered to fill in a replacement form belatedly, she was told it was too late, the deadline had passed and they would not receive the money.

She said: “We have no record of receiving this form. It could easily have been lost in the post. It wasn’t sent by recorded delivery.

“We did not receive any email notification that the form had been posted. Nothing.

“The RPA said they called us three times, but no one spoke directly to Steve or me. I offered to fill in the form, but they said: ‘No. It’s too late.’”

The only other form the couple has any record of completing to comply with the scheme was sent to them in 2011.

It included a letter from the commission, stating: “You need only complete this form once every five years for this agreement.”

As a protest, Mr and Mrs Peck have decided to close the woodland to the public and they have attached a sign to the entrance explaining why.

The sign says: “Sadly due to the Forestry Commission failing to meet their contractual obligations we are forced to close our woodlands to the public.

“For further information contact: Richard Greenhous at the Forestry Commission on 0300 067 4000.”

It’s so ridiculous. We have held our side of the bargain, [the Forestry Commission] should hold theirs Fiona Peck

The couple said they needed the £9,000 to maintain their award-winning woodland.

Mrs Peck said: “It’s a real shame we felt the need to close the woods. I would take children there – schools, Beavers and Cubs – to teach them about nature.

“It’s so ridiculous. We have held our side of the bargain, [the Forestry Commission] should hold theirs.”

Andrew Selous, Conservative MP for South West Bedfordshire, has also written to the Forestry Commission to urge them to pay up as soon as possible.

A Forestry Commission spokeswoman said: “The Farm Woodland Premium Scheme agreement holder failed to meet one of the requirements of the scheme, which resulted in the 2015 grant payment being withheld.

“They are appealing this decision, which is their right and is set out in the legislation which governs this scheme.”

Commenting on the commission’s response, Mr Peck said: “This is yet another bureaucratic exercise that unfairly penalises farmers.

“We hope that by raising our case with Farmers Weekly more people will come forward who have fallen into the same situation.”

Are you a farmer who has suffered the same or a similar fate? If so, contact the newsdesk now on 020 8652 4905 or email philip.case@rbi.co.uk