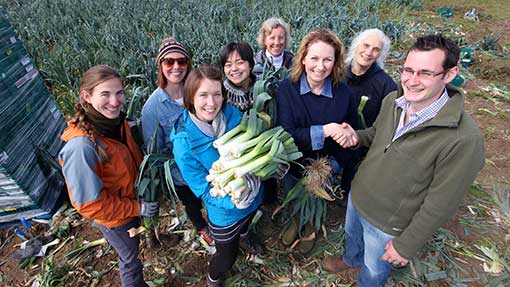 A Lincolnshire leek grower has teamed up with food waste campaigners to harvest surplus crops and donate them to local charities.

Tim Casey, of J&V Casey and Son, said he wanted to use surplus produce that would normally be ploughed back into the soil.

A team of volunteers visited Mr Casey’s farm at Dogdyke, near Boston, to harvest and then pack surplus leeks that would otherwise have gone to waste.

About 1,000kg of leeks were harvested – enough for 12,500 portions to be distributed to regional food and homeless charities.

The Gleaning Network aims to save the thousands of tonnes of fresh fruit and vegetables that it says are wasted on UK farms every year.

An increasing number of farmers are working with the network to find a home for crops which fail to meet retail strict cosmetic standards or otherwise cannot be sold.

Mr Casey said: “Overproduction is part and parcel of the fresh produce industry due to increasing volatility in prices, contracts and yields.

“Until now we had no way of using our surplus produce. Fortunately, this new initiative generated through the Leek Growers’ Association means we have an outlet for produce we would normally just plough back into the soil.

He added: “It’s great to know that local charities and those in need can benefit from it.”

Local Gleaning Network co-ordinator Vicki Beers said: “This farm has been really helpful – and all the farmers we work with are glad to see their veg go to a good home.

“It can be very frustrating for growers to see the crops they’ve tended and invested in going to waste. We are always looking for more farmers, and volunteers, to work with.”

“It wastes resources and has a high carbon footprint, helping to cause climate chaos. In the meantime, millions of people are going hungry in this country.

“This project tries to find solutions to all these problems together.”

The Gleaning Network estimates that it saved 48t of produce last year – equal to more than 200,000 meals – with more than 200 volunteers taking part in 18 “gleaning days”.

Produce is donated to charities and social enterprises that deal with food poverty such as FareShare, Company Shop and Community Food Enterprise.