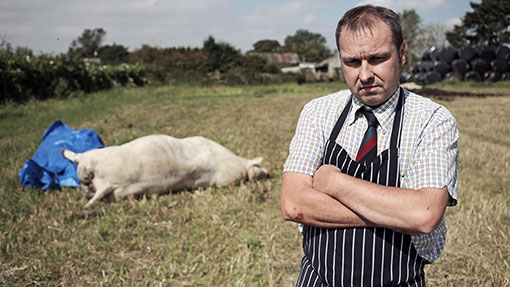 A furious farmer whose escaped bull was shot and killed by police has lambasted the marksmen responsible, calling for them to be better trained.

Mr Marley told Farmers Weekly that he had received a call on Monday 1 September from the North Yorkshire police control centre telling him the bull had escaped into a neighbouring field of cows.

Attempts to catch it had failed and the bull strayed on to the road. Mr Marley’s farmworkers then managed to return the bull to a 25-acre field.

But Mr Marley explained: “The police control office rang me at my butcher’s shop and said the bull had escaped. I said I would get down to the field and bring a bucket of cake to lead him to the housing. I knew I could lead him back to the shed with food.

“It was a only a seven-mile journey from my shop, which took about 20 minutes. But when I arrived the police had already shot him.”

Mr Marley said he was staggered. “There were police in high-visibility jackets packing up their kit and four marksmen – two of which had been hiding in a hedge and two on the roof of a special vehicle when they shot the bull.

The police told him it was because there was a dangerous animal at large and it was a danger to the public.

But Mr Marley insisted the bull was only 40m from his shed and the nearest house was three-quarters of a mile away.

He added that the bull was “calm and placid and wouldn’t have hurt anyone”.

The bull had been used for breeding on a 50-cow beef herd, providing meat for Mr Marley’s butcher shop in Ripon.

“Customers liked the traceability. They knew the beef was local.”

Some customers had their pictures taken with the bull, who was called Billy by Mr Marley’s young daughter.

“Billy was valued at £3,200 but I couldn’t replace him with another animal for that. Billy was unique. I haven’t told my daughter he’s gone. I can’t face it.

“He was the sort of bull that you could stroke and pat. I used to ride him about. He would follow anybody with a bucket of cake. That was all that was needed.”

Mr Marley has lodged an official complaint with the police about their actions.

“I want some answers. What they did was wrong. I don’t think they had an appropriate response to this situation so I am calling for them to be better trained in animal handling and to understand rural issues.”

A North Yorkshire Police spokesman said: “We are aware that a complaint has been made and it will dealt with by the Professional Standards Department. It would be inappropriate to comment further until this process has been completed.”